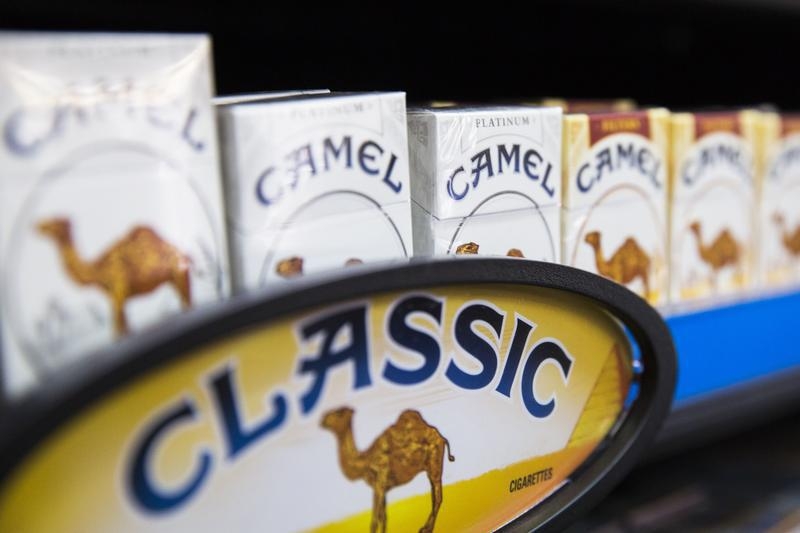 American trustbusters deciding whether to approve Reynolds American’s $55 billion deal with Lorillard will want to heed the market’s message. The combined market cap of the No. 2 and No. 3 U.S. cigarette makers has jumped more than $10 billion since merger talk surfaced. Those gains can’t be justified by the cost savings on offer. Expectations of an increase in pricing power, through the creation of an effective tobacco duopoly, may best explain investors’ enthusiasm.

Camel maker Reynolds unveiled plans to pay $27.4 billion, or $68.88 per share in cash and stock, for its smaller competitor, a 40 percent premium to the Newport maker’s share price before bid rumors came to light in early March. Including drops in shares of both today, Reynolds’ market value has increased by $5.4 billion and Lorillard’s added $4.6 billion.

Hoped-for synergies of $800 million, already on the high end of recent tobacco unions, only explain some of that. Taxed and capitalized, they’re worth perhaps $6 billion. Even folding in a 6 percent rally in the S&P 500 Index leaves billions of expected value creation unaccounted for.

Lorillard has an enviable position in menthol and e-cigarettes, two rare growth segments in tobacco. But it will offload its e-cigarette franchise to rival Imperial Tobacco, along with some smaller brands, in what appears to be a pre-emptive sop to U.S. antitrust regulators. And it’s hard to see how becoming bigger will materially boost menthol sales.

That leaves aggressive pricing to explain the titillation of investors. Reynolds and Lorillard argue that their merger and deal with Imperial would create two stronger competitors to the market leader Altria, which accounts for about half of U.S. cigarette sales. But the enlarged Reynolds and Altria together will account for about 85 percent of all U.S. tobacco sales, up from about 78 percent today. Lorillard, with about 13 percent of the market, will be replaced as industry No. 3 by Imperial, with just a 10 percent market share.

Lorillard and Reynolds will seek to downplay their new-found market power. Investors, though, are speaking clearly: they see prices going up. Indeed, Altria’s shares have risen by 18 percent since March – suggesting the benefits won’t be limited to Reynolds and Lorillard. Pricier cigarettes might be a boon to public health if it means people smoke less. But viewed through a narrower antitrust lens, the market is suggesting it would not be consumer-friendly.

Camel cigarette maker Reynolds American on July 15 said it had agreed to buy its smaller U.S. competitor Lorillard for about $27.4 billion in cash and shares. Lorillard, which makes Newport menthol cigarettes, agreed to sell several smaller brands and its Blu e-cigarette franchise to Imperial Tobacco for $7.1 billion as part of the deal. The transaction is expected to close in 2015.

The $68.88 deal price represented a 40 percent premium to No. 3 U.S. producer Lorillard’s share price on Feb. 28, the last trading day before talk of a potential bid surfaced.

Reynolds and Lorillard said they expected the merger to generate about $800 million per year in cost savings.