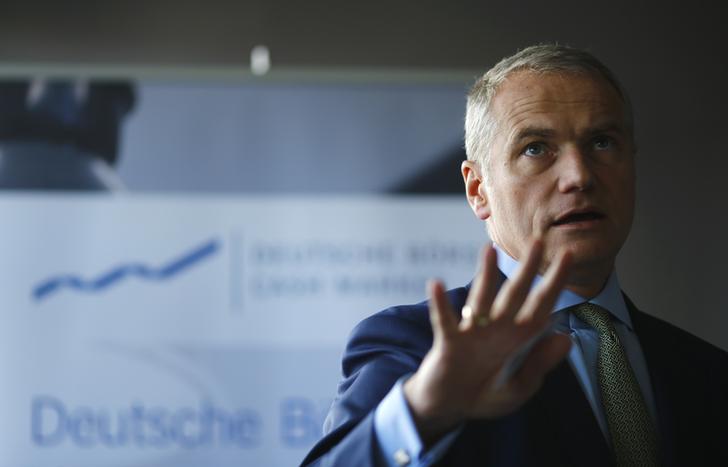 Investors only buy half of the logic of splicing together London Stock Exchange and Deutsche Boerse. The two European exchanges announced on March 16 that their proposed merger would create 450 million euros in annual cost synergies, in three years time. The market has factored this in, but little more.

Since Feb. 23, when the deal was announced, LSE shares have risen 14 percent from their three-month average of 25.30 pounds. Deutsche Boerse’s are up 4 percent from 57.74, the sterling value of its undisturbed share price average at the current exchange rate. Collectively, that’s a premium of 1.7 billion pounds.

The newly revealed cost synergies are worth about the same. Turn them from euro into sterling, tax them at 25 percent, and then discount them back at an assumed 8 percent cost of capital to reflect that they don’t appear for three years. Stripping out a 600 million euro charge to achieve the savings implies an uplift of 1.6 billion pounds.

If that was all the merger offered, it would be wide open to a rival approach from U.S. rival Intercontinental Exchange, which is already sniffing around. But LSE and Deutsche are confident they can generate revenue synergies too – from incentivising higher volumes through their LCH.Clearnet and Eurex clearing houses. The theory is that “cross-margining” kicks in, and clients can put up less collateral if they deal with a combined exchange than they would today.

Imagine the two exchanges could produce the equivalent of 11 percent of LSE’s revenue – an average of the last 10 years of exchange mergers, according to Credit Suisse. Apply that to the 1.6 billion pound top line analysts expect for LSE in 2017, then tax, capitalise and discount it, and there could be a hidden 1.1 billion pounds of value.

One worry might be that regulators or competition authorities may intervene. Another is that customers could claw those gains back for themselves. The fact is that investors don’t seem to buy this half of the story. In order for the deal to go smoothly, they probably need to.

Carsten Kengeter, CEO of Deutsche Boerse talks to the media during the presentation of FinTec start-up facilities provided by Deutsche Boerse in Frankfurt, Germany, February 24, 2016.

Deutsche Boerse and London Stock Exchange announced an agreed all-share merger on March 16, and said that pushing together the two exchange groups would create 450 million euros of annual cost savings.

LSE investors would get 45.6 percent of the group’s new holding company, which would be based in the UK. The two sides would retain headquarters in London and Frankfurt. The company’s chief executive would be Carsten Kengeter, who currently holds the same role at Deutsche Boerse.

The companies said cost savings were equivalent to 20 percent of the combined group’s costs of 2.2 billion euros, of which roughly half would come from technology efficiencies.

Based on 2015 financials, just under one-third of revenue for the merged company came from the UK, while 37 percent of revenue came from derivatives trading and clearing. The two groups hosted 5.2 trillion euros of equity trading volume.

Donald Brydon, chairman of LSE, would take the same role in the new company. Xavier Rolet, LSE’s chief executive, would stand down but remain as an adviser to the chairman and his deputy for up to a year.