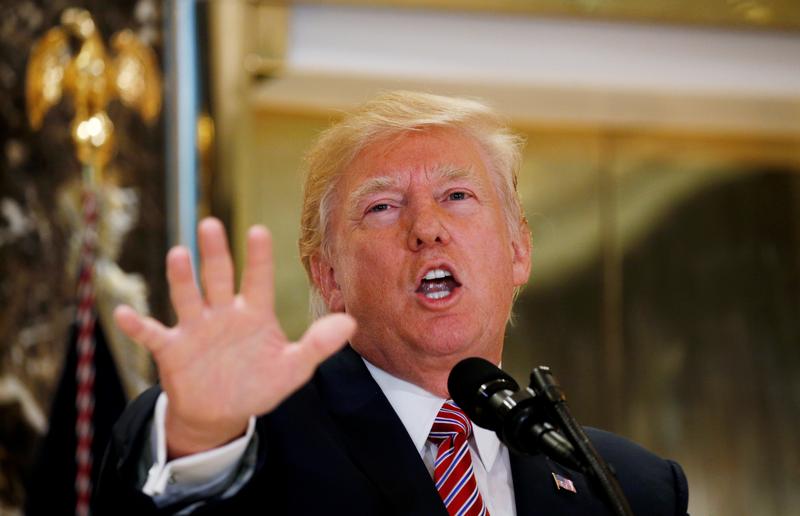 The president disbanded his advisory councils after a raft of CEOs quit. They are the latest to abandon a leader who has been defied by Congress, courts and the military. These bodies will be crucial in ensuring the nation’s stability. Investors so far appear confident they will.

U.S. President Donald Trump speaks about the violence, injuries and deaths at the "Unite the Right" rally in Charlottesville as he talks to the media in the lobby of Trump Tower in Manhattan, New York, U.S., August 15, 2017. REUTERS/Kevin Lamarque

U.S. President Donald Trump announced on Aug. 16 that he was disbanding his two business advisory councils after several executives said they were quitting over the administration’s response to a white supremacist rally in Virginia.

“Rather than putting pressure on the businesspeople of the Manufacturing Council & Strategy & Policy Forum, I am ending both,” the president wrote in a tweet. He made the comment after members of the strategy forum, led by Blackstone CEO Steve Schwarzman, said the group was disbanding. That group includes JPMorgan CEO Jamie Dimon, PepsiCo CEO Indra Nooyi and BlackRock CEO Larry Fink.

Earlier on Aug. 16, three more chief executives announced they were resigning from the manufacturing council. They include 3M's Inge Thulin, Campbell Soup's Denise Morrison and United Technologies’ Greg Hayes. They were responding to Trump’s comments on Aug. 15, when he again blamed both sides for violence at the Virginia rally that led to the death of one woman. Trump said not all of the participants were members of the Ku Klux Klan or neo-Nazis and some of them were “very fine people.”

The Standard & Poor’s 500 Index and the Dow Jones Industrial Average were little changed in afternoon trading.