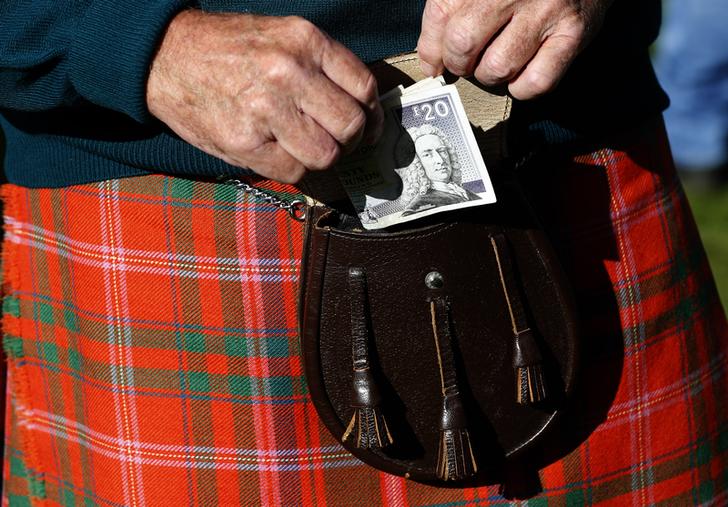 The United Kingdom may be living on borrowed time. With little more than a fortnight until Scots vote on independence, new polls suggest that pro-secessionists have made major gains.

The Yes-to-independence campaign has had a good couple of weeks. Alex Salmond, Scotland’s pro-independence first minister, was perceived to have won a debate with his No-vote counterpart on Aug. 25. Bank of England Governor Mark Carney’s comments on Aug. 13, which made clear the BoE was working on contingency plans, have been taken by some as meaning there’s little to fear from transition to independence. Still, it was the new poll that caused one-month sterling/dollar implied volatility to record its biggest one-day jump for three years.

The best way to kill the volatility is to inject certainty. A Yes vote would do the opposite. It is highly unlikely that there will be a quick answer given to the most basic question posed by a seceded Scotland – what currency it would use.

Politically, pro-union politicians in the rest of the UK will be unable to give Salmond what he wants – a commitment for the BoE to remain as lender of last resort to Scottish banks – without months of wrangling. It is unlikely that a victorious Salmond would opt for a pegged or independent currency either.

The best breakup scenario in financial stability terms would be for Carney to commit to backstop Scottish banks until March 2016 – the earmarked date for formal independence – and perhaps later. Both sides would then soberly and rationally divide up UK assets – or, more to the point, its debt.

It may not work out this way. A big chunk of Scottish bank deposits are held by non-Scottish citizens. If they or disgruntled No-voters start to fear the viability of a seceded Scotland and put their money in non-Scottish banks, it will strengthen the position of English nationalists asking why Scots should be given any sort of good deal. The risk is that a nascent currency union falls apart, as happened in similar circumstances with the Czech Republic and Slovakia in the 1990s.

All this could be avoided if Scots vote No. But anything less than a convincing rejection of independence could well mean a new referendum in a few years. The uncertainties may be only just beginning.

A man puts money in his sporran at the Birnam Highland Games in Scotland, August 30, 2014. Scotland will hold a referendum on independence on September 18.

Support for Scottish independence rose sharply in August, according to a new poll published on Sept. 1 by YouGov for the Sun and The Times newspapers.

The proportion of Scots intending to vote Yes to an independent Scotland on Sept. 18 rose to 42 percent, with 48 percent voting No and 10 percent undecided, according to a poll of 1,063 voters. A previous poll in August had No-voters at 51 percent, Yes-voters at 38 percent and undecideds at 11 percent.

In the currency options market, one-month implied volatility for sterling/dollar posted its biggest one-day jump since 2011. It rose to 6.1 percent, the highest since March. Three-month volatility also jumped, 12-month volatility less so.

The pound fell to its lowest in five months against the dollar and retreated against the euro. The FTSE 100 fell 0.1 percent. Ten-year government bonds rose five basis points to 2.435 percent.