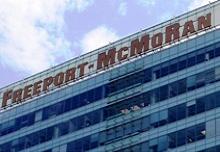 The U.S. explorer is bleeding cash after plowing $1 bln into a failing deep gas well. That makes the 74 pct premium offered by miner Freeport, whose chairman also runs McMoRan, look even richer – especially with gas cheap and abundant. Freeport’s shareholders are the losers.

McMoRan Exploration reported its fourth straight quarterly loss on Jan. 18, saying it had failed to start production from a deep gas well, which has so far cost nearly $1 billion to develop. The company’s exploration costs also rose 80 percent to $5.2 million in the fourth quarter.
Freeport-McMoRan offered $14.75 per share for McMoRan Exploration on Dec. 5, plus shares in a royalty trust that could be worth more than $2 each. According to a proxy statement filed on Dec. 28, the initial offer was reduced from $15.50 a share after a failed test at McMoRan’s Davy Jones No. 1 well in the Gulf Of Mexico. The company’s undisturbed share price was $8.46.
Freeport Chairman James Moffett is also the chairman and chief executive of McMoRan Exploration and owns 3.07 percent of that company’s shares.