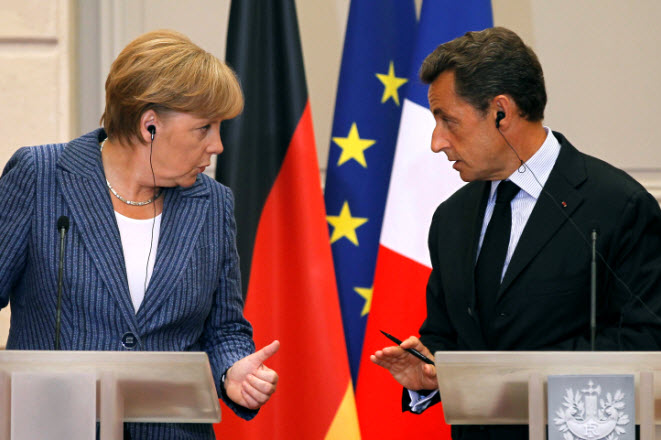 The Franco-German summit produced proposals for further euro zone integration. But the demand for balanced budgets was unmatched by any promise of more aid for peripheral states, while the mooted tax on financial transactions misses the point. Investors are rightly sceptical.

German chancellor Angela Merkel and French president Nicolas Sarkozy outlined proposals to strengthen the governance of the euro zone by electing a president who would oversee twice-yearly meetings of the zone’s 17 members.

Finally, Merkel and Sarkozy said they would put forward in September plans for a tax on financial transactions.

However, the two leaders disappointed investors by not putting forward more concrete proposals for the introduction of common euro zone bonds – a measure that some see as the only solution to Europe’s debt crisis.

Sarkozy said: “Euro bonds can be imagined one day, but at the end of the European integration process, not at the beginning”. Merkel suggested euro bonds would be a “last resort”.

A 0830 GMT on Aug. 17, the FTSE Eurofirst 300 index was down 0.5 percent at 964. The yield on 10-year German bonds tightened to 2.28 percent, while the spread between German bonds and Spanish and Italian bonds widened slightly.