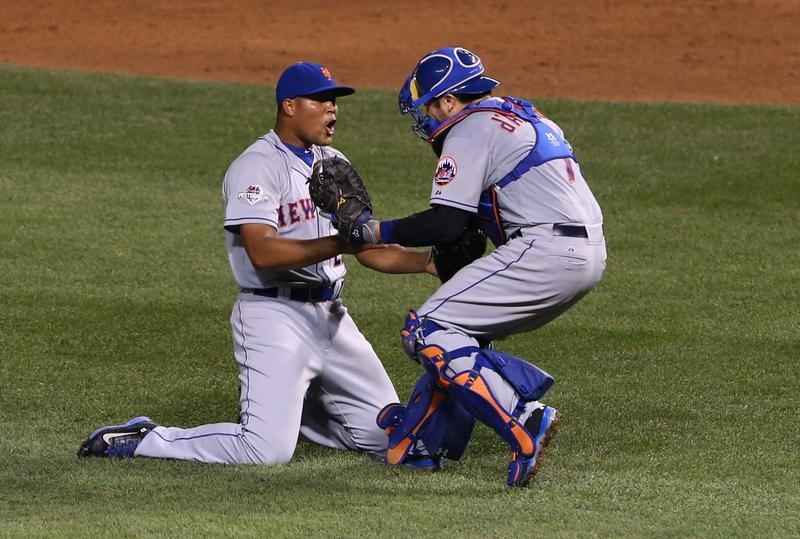 The New York Mets and the U.S. economy have pulled off a slick double play. As America staggered under the weight of dodgy mortgages, the baseball team was snookered by Ponzi schemer Bernard Madoff. Massive infusions of money helped right Uncle Sam, but the Amazins took a far more frugal path to revival – and a possible World Series title.

Like corporate America, the Mets were sizzling in 2006, coming within an inning of their fifth appearance in Major League Baseball’s finals. The bottom dropped out in 2009 – more than a year after the great recession hit – and the team struggled through losing seasons until 2015. Last night the Mets won the National League Championship Series by routing the Chicago Cubs.

Bad trades and boneheaded signings were, of course, largely to blame. It’s tough to recover from the likes of a $66 million contract for washed-up outfielder Jason Bay. And the Mets are still paying $1.2 million a year to major disappointment Bobby Bonilla, retired since 2000.

The Madoff debacle also played a role in the team’s misfortunes. The trustee cleaning up the fraud accused Mets owner Fred Wilpon and his partner of receiving $300 million in fictional gains and filed a $1 billion suit claiming they should have blown the whistle. The case was settled for $162 million, but it kept the Mets from spending their way out of losing. Even a $20 million injection from hedge fund boss Steve Cohen failed to make a difference.

Like the best companies, the club turned to savvy management. Sandy Alderson, the genius behind the Oakland A’s championship teams in the late 1980s and early 1990s, became the general manager and hired the crotchety Terry Collins as manager. They mostly eschewed big-ticket stars, trading celebrated players for minor leaguers like Matt Harvey, Noah Syndergaard and Travis d’Arnaud and nurturing homegrown talent like Jacob deGrom and Daniel Murphy. Those players are now the club’s core.

At just over $100 million in April, the payroll is hardly paltry. Yet it’s far less than the roughly $230 million for the Los Angeles Dodgers, the Mets’ first-round playoff victims and, obviously, not even in the same ballpark as the trillions needed to turn around the American economy.

Yet there’s a kind of symmetry to the Mets’ fortunes and those of the country that invented the ball-game pastime. A World Series appearance for the New York team puts a sort of exclamation point on the end of the financial crisis.

American baseball’s New York Mets on Oct. 21 completed a four-game sweep of the Chicago Cubs in the National League Championship Series with an 8-3 rout that put them into the World Series for the first time since 2000.

Second baseman Daniel Murphy added to his spectacular postseason by belting a home run for a Major League Baseball record sixth game in a row, while first baseman Lucas Duda came out of a slump to drive in five runs in the first two innings to lift the Mets.

Murphy, who hit four home runs and drove in six during the series, was named Most Valuable Player of the league championship.

New York will play the winner of the American League Championship Series between the Kansas City Royals and Toronto Blue Jays in the best-of-seven World Series starting on Oct. 27.