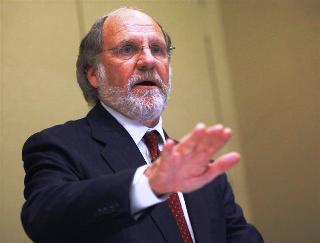 The failure of MF Global leaves egg on many faces. Paul Volcker and Barack Obama are among those to escape the mess. When the president added the complex proposal bearing the former Federal Reserve chairman’s name to new sweeping financial regulation last year, it looked like overkill. But the bankruptcy of the brokerage and wannabe investment bank run by Jon Corzine reinforces the idea that the ability to bet a firm’s own capital belongs only where its damage to the system can be limited.

MF Global fits squarely in that bracket for now. It’s not a bank, so can’t tap into taxpayer funds by way of the Fed’s emergency liquidity window in a crisis. Moreover, at $41 billion, MF Global’s balance sheet is less than a tenth the size that of Lehman Brothers when it collapsed in September 2008.

The firm’s drive to expand from middleman to risk-taker only picked up speed when Corzine took over in March 2010. That makes it a small operation by market standards, meaning there shouldn’t be much if any spillover of MF Global’s problems. Of course, there’s always the chance a Chapter 11 filing of any financial firm unearths wider hazards.

Either way, it’s a reminder that everyone from watchdogs to investors can’t let down their guard on the risks traders take. In this case, all seem to have done so. MF Global committed similar errors to those laid bare by the financial crisis. At times, it heaped on excessive leverage of around 30-to-1. And its $6 billion-odd position in European sovereign debt was, at 15 percent of its balance sheet, far too concentrated.

Shareholders obviously overlooked these factors. So did bondholders, who instead focused on the possibility of Corzine, a former New Jersey senator and governor, returning to politics, evidenced by certain interest rate clauses written into the firm’s debt.

Regulators bear some blame, too. Not only did they leave MF Global alone until summer, the Fed actually anointed the overextended brokerage a primary dealer in U.S. bonds earlier this year. That makes getting regulations like the Volcker Rule written and implemented correctly all the more significant.

The firm’s shares had declined by two-thirds in the past week after it announced a $191 million quarterly loss, as revenue from proprietary trading plummeted and it revealed it still held more than $6 billion in exposure to European sovereign debt - 15 percent of its balance sheet. Moody’s and Fitch subsequently downgraded MF Global’s debt to junk status.

Corzine and his advisers, including Evercore Partners, tried to find buyers for all or parts of the firm. A deal to sell some of the firm’s assets to Interactive Brokers for as much as $1 billion broke down on Oct. 31.