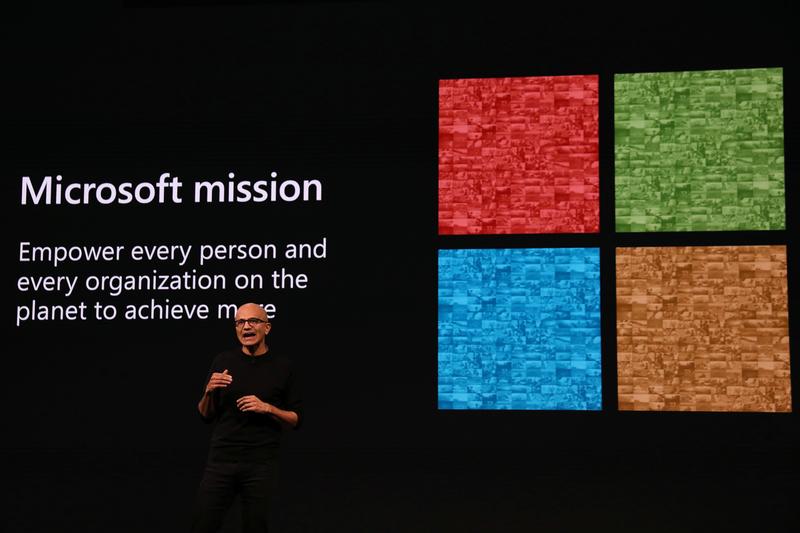 The secret to escaping a bear is to run faster than your friends. In the same way, Microsoft’s advantage is its peer group’s baggage. Regulatory scrutiny is holding back Apple, Amazon.com and Alphabet. Microsoft boss Satya Nadella is freer to do deals and promote his company’s software.

The companies are all growing fast, and only Apple is larger than Microsoft’s $2 trillion in market capitalization. Microsoft’s revenue increased 19% year-on-year in January to March this year, the company said on Tuesday. Enterprise productivity software, like Word, remains a cash cow, while sales of services such as Azure, Microsoft’s cloud-computing answer to Amazon Web Services, grew 50% in the period.

In March, the company completed a $7.5 billion purchase of ZeniMax Media, the maker of games like “Fallout,” and earlier this month it announced a deal worth $20 billion to buy speech-recognition firm Nuance Communications. The last acquisition of similar size by any of Microsoft’s peers was Amazon’s $14 billion purchase of Whole Foods Market in 2017.

Yet despite Microsoft’s own antitrust history, neither lawmakers nor regulators seem bothered. They have been more focused on consumers, be it Amazon’s domination of online retailing, Apple’s role in app distribution, or Alphabet’s massive market share of online search through its Google unit.

And key parts of Nadella’s strategy are working. Take LinkedIn, the professional networking site. Revenue grew 25% year-on-year in the most recent quarter, and it has taken in some $9 billion over the past 12 months. Microsoft paid $26 billion for the unit in 2016. Facebook, a consumer social network, is valued at nearly 9 times revenue according to Refinitiv. On this multiple, LinkedIn could be worth roughly $80 billion.

As for gaming, in addition to ZeniMax, Microsoft shelled out $2 billion for the maker of “Minecraft” in 2014. While Xbox console rollouts make revenue jumpy, quarterly sales from gaming are more than twice as big as they were five years ago.

A company of Microsoft’s size will struggle to stay out of the spotlight indefinitely. If it isn’t driven by politicians or watchdogs, it could be something like Slack Technologies’ antitrust complaint with the European Commission last summer, which alleged Microsoft was illegally promoting Teams. For now, though, Microsoft can outrun its biggest peers.

Microsoft CEO Satya Nadella speaks during a device-launching event ahead of the Mobile World Congress in Barcelona, Spain February 24, 2019.