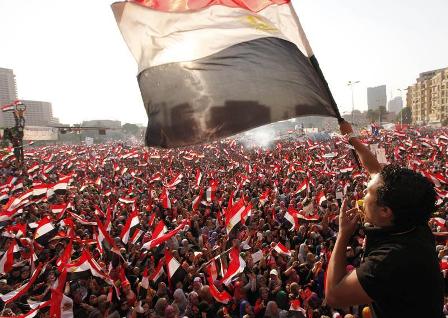 Egypt is entering a dangerous period. The ousting of President Mohamed Mursi – the country’s first freely-elected leader – and the Muslim Brotherhood after just one year in power cements divisions and confirms the army’s role as kingmaker. A swift return to civilian democratic rule is critical but the path is fraught with social and economic risks.

The fact that so many of Egypt’s top political and religious figures support the army’s transitional plan underscores Mursi’s failure to deliver on his promise to build an inclusive Egypt. The shoddy Islamist-leaning constitution has been suspended. The president of the Supreme Constitutional Court, backed by a technocratic government, will rule until early presidential and parliamentary elections, for which no date has been set.

But fresh elections may not result in a better outcome. It’s unclear if the Brotherhood will participate, or resort to violence. The danger is that moderate members of the long-repressed movement may be radicalised by the latest events. If the liberal opposition is unable to win over the Brotherhood’s supporters, Egypt could end up being ruled by the ultra-conservative Islamist Nour party, the country’s second biggest political group. In that event, democracy might not last long.

Egypt’s financial position is also deeply uncertain. Foreign reserves are dangerously low and the pound continues to depreciate. The International Monetary Fund would find it hard to lend to the country while it is in transition. And the $1.3 billion that the Egyptian military receives from the United States each year may be suspended if the U.S. administration formally defines Mursi’s removal as a coup.

Qatar, a key backer of the Brotherhood, could tip Egypt into disaster if it decided to withdraw some of the $8 billion in financial support it has provided in bonds and central bank deposits. Saudi Arabia and other Gulf countries could step in but may be reluctant to do so until it is clear who is in charge, according to Noah Capital Markets.

Another big worry is the effect the Brotherhood’s marginalisation will have on Egypt’s neighbours. Moderate Islamists now rule in Tunisia and the Brotherhood is one of the most important Syrian opposition groups in exile. If Egypt lives up to its reputation as a regional trendsetter, an Arab winter may lie ahead.

Egypt’s army overthrew President Mohamed Mursi on July 3 after just one year in power as the country’s first democratically-elected leader.
Top army commander General Abdel Fattah al-Sisi announced on television that the Islamist president, who is backed by the Muslim Brotherhood, had failed to meet the demands of the people.
Sisi suspended the country’s controversial constitution and announced a roadmap for a return to civilian rule.
The president of the supreme constitutional court will act as the interim head of state, assisted by an interim council and technocratic government, until new presidential and parliamentary elections are held. No dates have been set for elections.
A statement published on Mursi’s official Facebook page said the measures amounted to “a full military coup” and were “totally rejected”.
The official spokesman of the Muslim Brotherhood said supporters were willing to become martyrs to defend Mursi.
Mursi is being held in a military facility and the Muslim Brotherhood’s entire senior leadership has been barred from leaving the country, according to security sources.
U.S. President Barack Obama ordered a review of its financial support to Egypt, which includes around $1.3 billion of military aid each year.