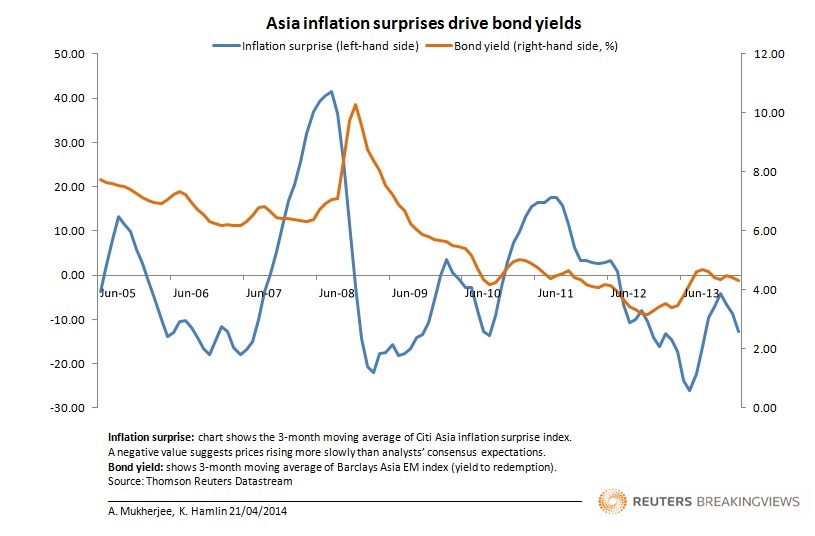 Asia’s inflation is missing. Analysts have been caught by surprise. If it isn’t found soon, the region’s frothy bond prices could get even higher.

Economists’ predictions have been way off, according to a Citigroup index measuring actual gains in consumer and producer prices relative to the consensus estimate. A number below zero means expectations were too high – or actual outcomes too low. The reading of minus 14.7 in March was the lowest in eight months.

When inflation picks up, so do bond yields, which drives prices of those bonds down. Before the 2008 crisis, consumer prices in Asia were rising at a faster-than-anticipated pace. Investors demanded more compensation for holding paper with fixed-rate returns, and policy-makers raised short-term rates, so yields on sovereign debt surged.

Since 2012, though, inflation has undershot forecasts. But the average yield on Asian bonds, while at a fairly low level because of hot money inflows, hasn’t fallen as might be expected.

It’s partly because of confusing signals over when the U.S. Federal Reserve will edge up rates. That could move investors to sell Asian bonds as their relative appeal diminishes. But if the Fed were to sit tight, today’s low-growth, disinflationary environment would make Asian bonds look quite attractive. If investors decide U.S. interest-rate increases aren’t imminent, regional disinflation could again set yields’ direction.

Most signs point downward. In China, the price of goods is rising below the official target. Thai prices are anaemic. Singapore and South Korea’s central banks have trimmed their estimates. Fast-growing Philippines lacks a compelling reason to raise interest rates soon, while Bank Indonesia might be able to lower them by 2015. India stands out as a country with too-high inflation, but the central bank looks poised to cut rates, not raise them.

Investors have lapped up more than $50 billion in bond sales by Asian issuers in 2014, slightly more than in the same period of 2013. There’s room for more, especially if money-printing in the euro zone, and more easing in Japan, send more capital in search of emerging market returns. Once the uncertainty surrounding the Fed dissipates, and investors lower their expectations of premature U.S. interest-rate increases, the bet on Asia’s missing inflation could get crowded.

Citigroup’s inflation surprise index for Asia Pacific outside of Japan was minus 14.7 in March, the lowest in eight months. A negative value suggests consumer and producer prices are rising more slowly than analysts’ consensus expectations.

The yield to redemption on Barclays’ sovereign bond index for Asian emerging markets declined to 4.26 percent on April 16, from this year’s high of 4.68 percent on January 8, according to data compiled by Thomson Reuters.

Chinese producer prices fell 2.3 percent in March from a year earlier, matching their fastest pace of decline in nine months. Consumer price inflation of 2.4 percent was below the government’s target of 3.5 percent for 2014, and has reached 3 percent or more in only four of the past 22 months.

Singapore on April 14 cut its 2014 inflation forecast to 1.5-2.5 percent, from a previous estimate of 2-3 percent. On April 10, South Korea cut its forecast for gains in consumer prices this year from 2.3 percent to 2.1 percent, against a low-end target of 2.5 percent.

Bank Indonesia Deputy Governor Halim Alamsyah said he sees a chance of rate cuts next year as inflation slows, Bloomberg News reported April 16, based on an interview with the policymaker.

Inflation in the Philippines slowed to 3.9 percent in March, from 4.1 percent in February. The central bank’s target for inflation this year is between 3 and 5 percent. Thai inflation expectations are at a 44-month low.