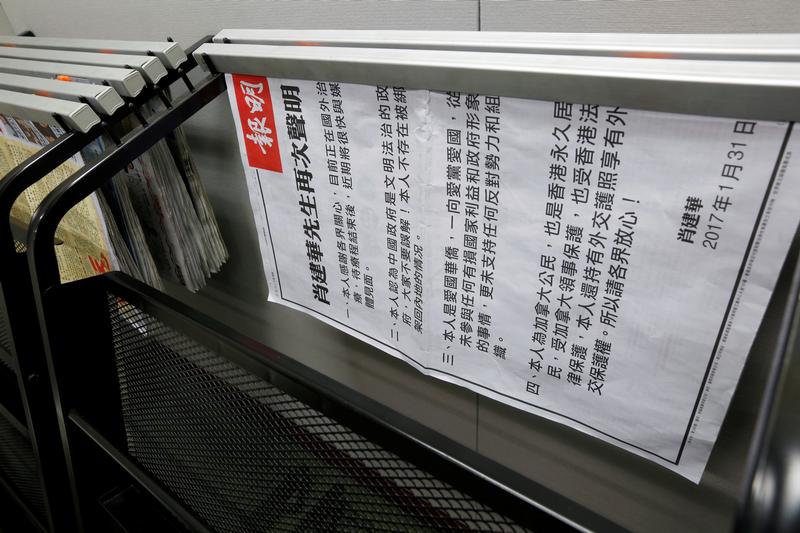 A mainland tycoon has vanished from Hong Kong, reportedly taken by Chinese agents. If true, it would suggest China’s seizure of Hong Kong booksellers in late 2015 was not a one-off. The case could cast fresh doubt on the financial centre’s degree of autonomy from Beijing.

Xiao runs Tomorrow, a financial group, and is ranked 32nd on the 2016 Hurun China rich list, China's equivalent of the Forbes list, with an estimated $6 billion fortune. Born in China, he is reportedly a Canadian passport holder and holder of a Hong Kong resident card.

A statement in Xiao's name that appeared on his company's WeChat account said Xiao has not been abducted and was currently abroad being medically treated, Reuters and other media reported. The same statement appeared on the front page of Hong Kong daily Ming Pao, but was deleted from the WeChat account.

The Hong Kong police said in a statement to Reuters that Xiao had entered mainland China through a border checkpoint on Jan. 27 and that they were seeking more information on the case from Chinese authorities.

A police source briefed on the investigation told Reuters the case was initially treated as a "kidnapping" following a complaint from someone connected to Xiao, but after a review of CCTV footage at the Four Seasons and at the border checkpoint, police concluded that Xiao had voluntarily left Hong Kong.

Five Hong Kong booksellers with links to a local publisher that specialised in works critical of Chinese leaders went missing in late 2015 and resurfaced in mainland Chinese police custody months later. One held a British passport and another was a Swedish citizen. Four appeared on Chinese television and said they were being detained in mainland China for illegal book trading.

Under the "one country two systems" formula, Hong Kong has been granted a high degree of autonomy as well as its own political and legal system since the financial and trade centre's return to China in 1997.