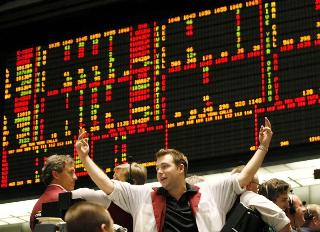 Financial markets are tiring of the Federal Reserve’s love offerings. The U.S. central bank has long been able to soothe nervous investors with rate cuts or newly-printed money. But markets spurned Wednesday’s announcement of the Twist, an operation to lengthen the maturity of $400 billion of the Fed’s $1.7 trillion U.S. Treasury.

Stock markets fell sharply and the price of bonds from governments still considered safe rose. Investors were right not to be impressed. The Twist is aimed primarily at the U.S. housing market. But even if the Fed’s rearrangement lowers mortgages costs, house prices will be held back by a weak economy and the massive oversupply left over from the bubble years.

Tight monetary policy has long ceased to stand in the way of economic growth. Official real interest rates are solidly negative almost everywhere. The Twist could even impede lending – and growth – by narrowing the gap between short and long term rates. Banks, after all, gain from a steep yield curve.

Central banks could try to regain investors’ favour with yet more monetary love. The Bank of England dropped some not so subtle hints on Sept. 21 about another round of quantitative easing. There are calls in the United States for QE3. But no amount of money – whether it comes from fiscal transfers, QE3 or QE33 – can force banks to lend or consumers to borrow and spend.

More money will not push up the prices of financial assets which investors deem too risky. The Asian market rout is caused in part by fund managers trying to get ahead of an expected wave of redemptions from cross-border investors. But while the gains from monetary stimulus are small, the potential harm is significant. The Fed and its peers are creating piles of money which would be put in and taken out of different assets in disruptive quantities and dizzying speeds.

In the current economic environment, the twists and turns of monetary policy will not reduce unemployment or rebalance trade. It would be better for the world if central banks stopped trying.

The Markit Services Purchasing Managers’ Index (PMI) for the euro zone fell from 51.5 in August to 49.1 in September. The Reuters consensus estimate was 51.0. In China, the HSBC PMI fell from 49.9 to 49.4 in the most recent month.

A trader at the Chicago Board of Trade in Chicago

The Markit Services Purchasing Managers’ Index (PMI) for the euro zone fell from 51.5 in August to 49.1 in September. The Reuters consensus estimate was 51.0. In China, the HSBC PMI fell from 49.9 to 49.4 in the most recent month.