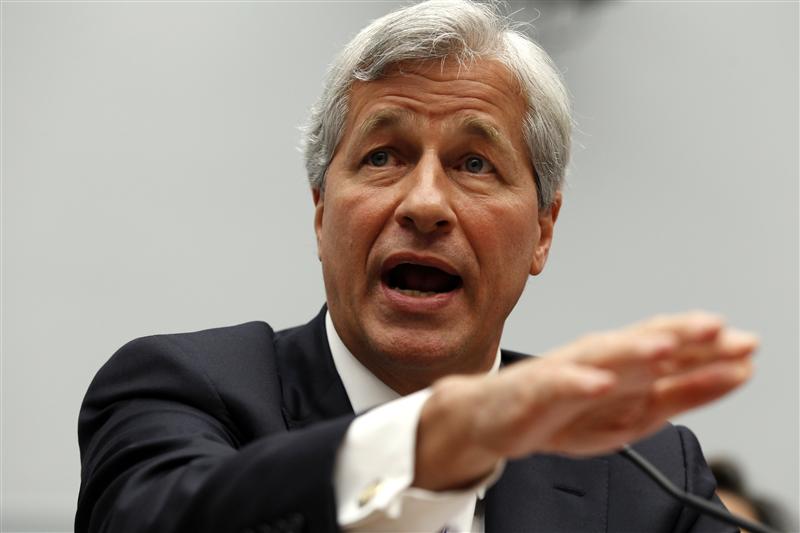 Shareholders might want to take a hint from this week’s news on compensation for Wall Street chief executives. JPMorgan is paying a portion of Jamie Dimon’s bonus in cash for the first time since 2011. And Goldman Sachs is boosting how much hard money Lloyd Blankfein gets. Meanwhile, bank stock gains are slowing.

The directors of big lenders came under pressure after the financial crisis to cut CEO pay and hand out more of it in stock. Blankfein, for example, is taking home a total of $24 million for 2014, around a third of his 2007 package. Most bosses now get at least 70 percent of their bonus in stock, usually locked up for at least three years. Blankfein cannot touch his latest slug of shares until 2020.

Some banks went even further. JPMorgan, for instance, stripped Dimon of a cash bonus in 2012 after the London Whale trading fiasco. They also cut his total pay in half, bumping it back up in 2013 but sticking with an all-stock bonus.

Now, though, he is getting $7.4 million in cash, or 40 percent of his 2013 bonus. Blankfein is getting roughly the same in readies, representing a third of his bonus, up from 30 percent in recent years.

It’s a shift that may prove instructive for investors. The past four years have in general been a profitable time for bankers to be paid in shares. Since the start of 2012, for example, JPMorgan’s stock price has jumped 73 percent and Goldman’s 94 percent. Those hit harder by the crisis – Bank of America and Morgan Stanley among them – have shot up by triple digits.

But the juice may be running low. Only BofA and Morgan Stanley managed double-digit gains last year, at 14 percent and 25 percent respectively. And the earnings outlook is limp. Goldman’s net income is expected to stay flat this year and next, according to estimates compiled by Reuters. JPMorgan may boost its bottom line by 8 percent in each of the next two years, but much of that is due to lower legal costs so is probably already baked into the stock price.

Cash bonuses may, therefore, seem relatively more appealing to bank bosses, though stock still accounts for the bulk of their bonuses. If that’s part of the reasoning, even subconsciously, investors might want to take it on board.

Goldman Sachs Chairman and Chief Executive Lloyd Blankfein was paid $24 million for 2014. His $22 million bonus was split between $7.3 million in cash and $14.7 million in restricted stock. Half of his stock award is subject to performance conditions. The cash accounts for 33 percent of his bonus, up from 30 percent in the four previous years.

Goldman Sachs Chairman and Chief Executive Lloyd Blankfein was paid $24 million for 2014. His $22 million bonus was split between $7.3 million in cash and $14.7 million in restricted stock. Half of his stock award is subject to performance conditions. The cash accounts for 33 percent of his bonus, up from 30 percent in the four previous years.