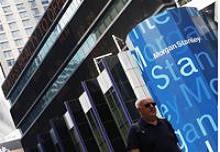 Wealth management, the centerpiece of James Gorman’s strategy, powered the bank’s improved Q1 profit. Cost discipline and a tax break helped. A competitive return on equity, however, requires more from its weaker arm: fixed income. Until then, Morgan Stanley will be a laggard.

Morgan Stanley on April 18 reported first-quarter net income of $958 million, or 50 cents a share, on revenue of $8.2 billion. Excluding the effect of having to mark its own liabilities to market, the bank earned $1.2 billion on revenue of $8.5 billion, or 61 cents a share. The consensus estimate of analysts was for earnings of 57 cents a share, according to Thomson Reuters data.
Results included a net tax benefit of $142 million stemming from a revised measure of reserves and related interest and a benefit from a retroactive change in U.S. tax law. The effective tax rate for the quarter was 21.2 percent.