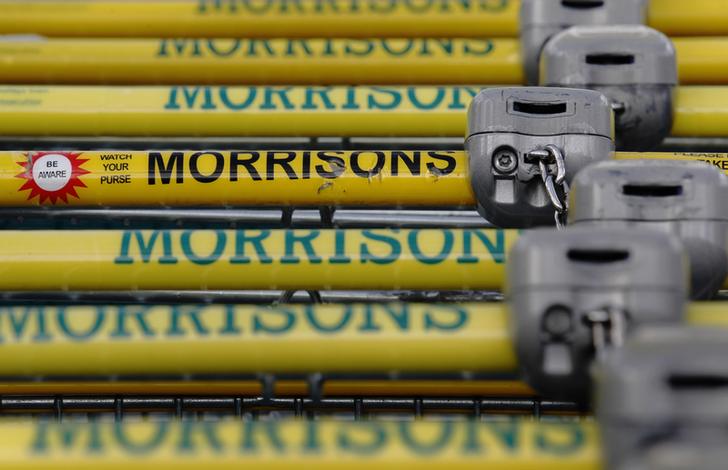 Shopping trolleys are seen parked at a Morrisons supermarket in north London March 14, 2013.

Underlying profit before tax at Wm Morrison Supermarkets fell 51 percent to 181 million pounds ($294 million) in the six months to Aug. 3, the British grocer said on Sept. 11. The result was ahead of a forecast 174 million pounds, Reuters reported, citing an analyst poll provided by the company.

Morrisons, Britain’s fourth-biggest food retailer, also said it would raise its interim dividend by 5 percent to 4.03 pence. Shares in Morrisons rose in early trading before reversing course. They stood 0.57 percent lower at 175.8 pence a share by 0955 GMT.

On the same day, Waitrose, the grocery arm of the unquoted John Lewis Partnership, said like-for-like sales rose 1.3 percent in the half-year to July 26. Operating profit before exceptional items at Waitrose fell 9.4 percent to 145.2 million pounds.

Sales at Ocado, the online grocery specialist which partners with both retailers, rose 22.5 percent in the 12 weeks to Aug. 10, it said. Average order value fell 1.7 percent to 111.64 pounds.