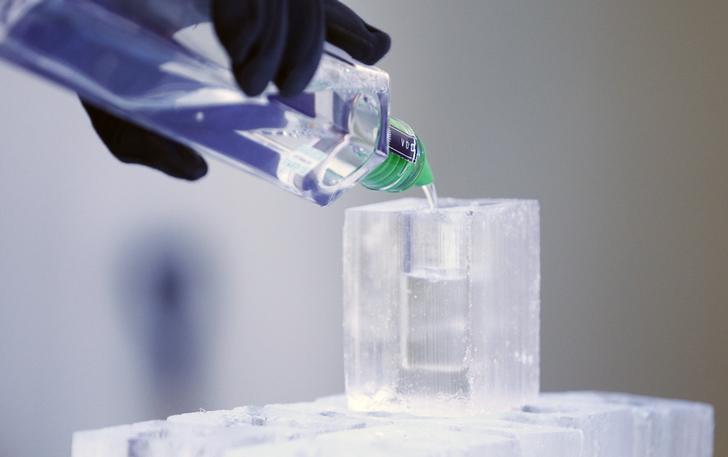 The former owners of Yukos, the energy group founded by Vladimir Putin foe Mikhail Khodorkovsky, are going after the Kremlin by grabbing trademarks for brands like Stolichnaya. These won’t make up for their lost $57 bln but may give aggrieved investors some negotiating leverage.

A barmaid pours vodka in an ice glass at the Ice Hotel in Quebec City, February 13, 2015.

Shareholders in the now-defunct Russian oil giant Yukos have seized Netherlands-based trademarks of well-known vodka brands controlled by the Russian state, a spokesman for the group which represents 70% of the former owners said on May 18.

The rights to brands including Stolichnaya and Moskovskaya vodka in Belgium, the Netherlands and Luxembourg were taken from SPI Group’s Spirits International and awarded to Russian state-owned Sojuzplodoimport in a separate case in January.

Yukos went bankrupt in 2006 after oil tycoon Mikhail Khodorkovsky fell out with Russian leader Vladimir Putin and the government began demanding billions of dollars in alleged back taxes that ultimately resulted in it being expropriated by the state.

Earlier this year, a Dutch appeals court reinstated a July 2014 ruling by the Hague-based Permanent Court of Arbitration which ordered Moscow to pay damages to Yukos shareholders, saying the Kremlin had manipulated the legal system to bankrupt the company and take Khodorkovsky’s assets.