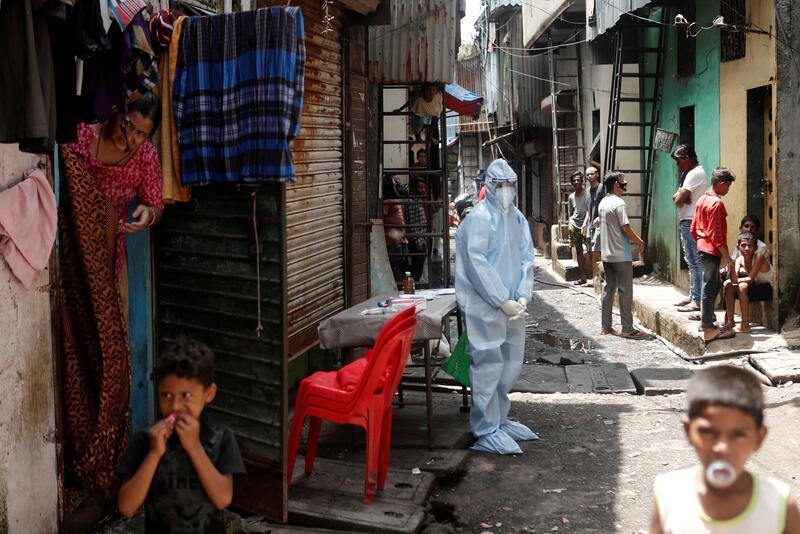 Nearly 60% of people in densely packed areas have had Covid-19, a study found, suggesting a low fatality rate. About 40% of the Indian financial capital’s residents live in similar settings. The city’s strict shutdown may now be impoverishing more than protecting the poor.

A healthcare worker wearing personal protective equipment (PPE) waits to test residents during a medical campaign for the coronavirus disease (COVID-19) at a slum area in Mumbai, India, June 30, 2020.

About 57% of people sampled in densely packed slum areas of Mumbai were found to have Covid-19 antibodies, according to findings published on July 28 from a study commissioned by the city’s municipal authority, an Indian government think tank, and the Tata Institute of Fundamental Research.

The first round of the study was also supported by the IDFC Institute, a local think tank, and the A.T.E. Chandra Foundation, led by Amit Chandra, the India head of private equity firm Bain Capital. 6,936 samples were taken from three wards of the city in slum and non-slum areas. The rate of so-called seroprevalence was 16% in non-slum areas.

The figures, factoring in the Mumbai municipality’s records on reported deaths, imply a low infection fatality rate at between 0.05% and 0.1%, the research group added in a press release, compared to a fatality rate of between 5% and 6% for those earlier diagnosed with Covid-19.