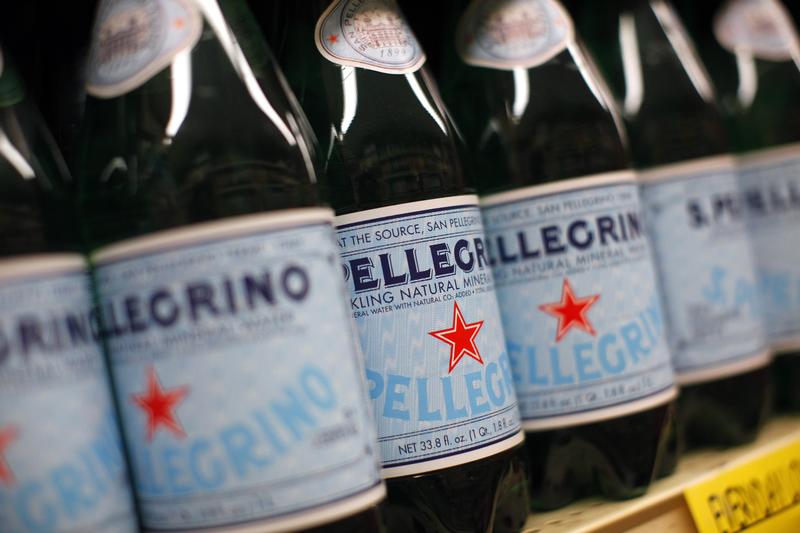 The $316 bln consumer giant wants to revive a tepid growth in a business dogged by environmental concerns. Splitting the division into three locally-managed units may help the Perrier maker push new products. But any dilution of financial reporting would also mean less scrutiny.

Bottles of Pellegrino are sold in a market in New York June 15, 2009. At New York's Del Posto, diners can share a $130 entree of wild branzino fish with roasted fennel and peperonata concentrato and a $3,600 bottle of Dom Perignon. They cannot share a bottle of Perrier or San Pellegrino water. The Italian restaurant is one of several shunning bottled water, along with the city of San Francisco and New York state. As environmental worries cut into sales from traditionally lucrative bottled water, beverage companies such as Coca-Cola, PepsiCo, Nestle and SABMiller are becoming more attuned to the risks of negative consumer environmental perceptions.

The $316 billion maker of S.Pellegrino and Perrier also said it will reorganise its struggling water business after the unit’s nine-month organic sales growth slowed to 0.5%.

Nestlé said it will integrate the Nestlé Waters business into the group’s three geographical zones from Jan. 1. Maurizio Patarnello, head of the unit, will leave the company.

Nestlé also said it planned to return up to 20 billion Swiss francs ($20 billion) to shareholders between 2020 and 2022.

It confirmed full-year guidance of organic sales growth of around 3.5% and underlying trading operating profit margin at or above 17.5%.