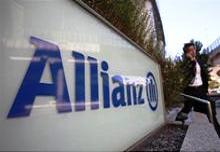 The group raised its dividend by 29 percent to 6.85 euros per share. Analysts polled by Reuters had on average expected a payout of 7 euros. Shares fell 1.7 percent by early afternoon to 147.50 euros.

Allianz said operating profit would be broadly steady in 2015, though it could be 400 million euros higher or lower depending on market movements and large claims for damages.