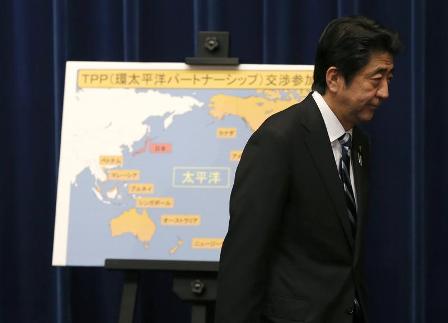 Global trade is going private. After a frustrating 12-year-long wait for the World Trade Organization to hammer out an accord acceptable to its 159 members, businesses and governments are now hedging their bets. Enter the Trans-Pacific Partnership, or TPP, which received a boost this week with Japan joining the negotiations.

What is the Trans-Pacific Partnership?

It’s a proposed 12-nation trade bloc that economist Richard Baldwin calls a “mega-regional” group. Between them, Australia, Brunei, Canada, Chile, Japan, Malaysia, Mexico, New Zealand, Peru, Singapore, the United States and Vietnam are home to 800 million people and $28 trillion in annual output. A deal is expected later this year, or in 2014.

Some countries are notable by their absence. Russia has declined membership, and China is waiting and watching. That suits the United States and Japan just fine – they have a chance to write the commerce rule book, and hope that the large developing nations will play along.

What will it do?

Market access will be top of the agenda. Californian rice growers want to enter Japanese homes more aggressively. Japan wants to protect its farmers, but it also wants to sell more cars in the United States.

In fact though, the TPP might not be the best place for such deals to be cut. Any nations not included, which includes the whole of Africa and South Asia, would be left out. A goal to open up protected markets for government procurement looks more useful. That’s one of the WTO’s failings: its limited agreement covers just 15 members outside the European Union.

Countries outside the TPP could benefit too. Imagine Malaysia agrees through the TPP to treat Japanese and American contractors on par with local suppliers. After that, there will be little point in protecting the government-tender market from vendors from China, India or anywhere else.

Will China and India join?

Perhaps, but probably not for years. While the TPP is sometimes characterised as an attempt to freeze China out, the real issue is that the TPP’s principles may be at odds with China’s way of running an economy. It’s likely members will be asked to reduce subsidies, state guarantees and other advantages that government-controlled companies enjoy. The structure of Chinese industry, which is dominated by state-owned enterprises, would need to change dramatically.

India too has quirks that the TPP may not easily accommodate. India is a signatory to a 1995 WTO accord on intellectual property, but it makes cheap generic copies of patented drugs for its own citizens as well as for AIDS and cancer patients in other developing countries. The TPP may insist on stronger protection of innovators’ rights. Both China and India will need significant additional benefits from the TPP before they agree to further open up their consumer markets.

Will it get public support?

Even if governments buy in to the TPP, electorates may not. First, negotiations are somewhat secretive. There has been only a token attempt to engage with civil society, which may promote the sense that the whole exercise is rather undemocratic.

Many small nations already worry about being able up to stand up to powerful multinationals; a further tilt toward business interests won’t go down well with environmentalists and public-health activists.

Why so many trade accords?

The list of acronyms grows ever longer: the TPP joins NAFTA, ASEAN, ASEAN-plus-3, MERCOSUR, EFTA, COMESA and many more. The gloomy view is that the mushrooming of separate alliances means trade has fragmented, and the spirit of post-World War II internationalism is dead.

It’s probably not that bad. Global supply chains started to disintermediate multinational accords long before the proliferation of trade deals. Besides, there is still a place for the WTO, which includes more than ten times as many countries as the TPP. Despite its bureaucracy and tardiness, it’s the only trade body that can help countries too poor to join a regional bloc.

The TPP’s main appeal is that with a smaller membership, it might actually get something done, or at least set the trade agenda. With sensible rules and an open-door policy, that might provide a useful template for getting the WTO working after all.

Japan joined the 18th round of Trans-Pacific Partnership talks in the Malaysian resort of Kota Kinabalu on July 23. After the addition of Japan, twelve nations have vowed to conclude an accord by the end of the year.
The other partners in the TPP are Australia, Brunei, Canada, Chile, Malaysia, Mexico, New Zealand, Peru, Singapore, the United States and Vietnam.
Separately, the United States and the European Union have launched negotiations for a Transatlantic Trade and Investment Partnership.
The World Trade Organization’s Doha round of multilateral trade liberalization began in 2001. The talks are yet to conclude.

Japan's Prime Minister Shinzo Abe walks in front of a map showing participating countries in rule-making negotiations for the Trans-Pacific Partnership (TPP) as he leaves a news conference at his official residence in Tokyo March 15, 2013

Japan joined the 18th round of Trans-Pacific Partnership talks in the Malaysian resort of Kota Kinabalu on July 23. After the addition of Japan, twelve nations have vowed to conclude an accord by the end of the year.
The other partners in the TPP are Australia, Brunei, Canada, Chile, Malaysia, Mexico, New Zealand, Peru, Singapore, the United States and Vietnam.
Separately, the United States and the European Union have launched negotiations for a Transatlantic Trade and Investment Partnership.
The World Trade Organization’s Doha round of multilateral trade liberalization began in 2001. The talks are yet to conclude.