The crutch of the matter 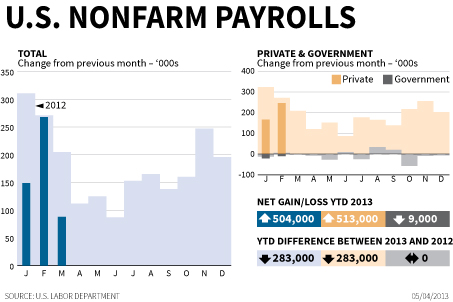 A new despair is seeping out of U.S. employment numbers. The economy added just 88,000 new jobs in March, according to data released by the Bureau of Labor Statistics on April 5. And the number of people counted as available to work fell to its lowest level in 34 years.

The labor participation rate now stands at just 63.3 percent. That’s 0.2 percentage point below February’s number and a worrying 2.7 percentage points below the level at the end of 2007 as the boom came to a close. Baby boomers growing old and retiring early is responsible for part of this – even though employment of over-55s has increased steadily through the recession.

But another factor is that almost 9 million American citizens now rely on disability benefits – doubling since the mid-1990s when welfare was last reformed. Having increased by 25 percent in the past five years, it appears to account for a fifth of the fall in participation.

Recent investigations by the Atlantic and NPR have unearthed a variety of reasons. It’s a no-brainer for cash-strapped states, for example: unlike unemployment benefits, disability pay is covered by the federal government. Some states, including Washington, have even hired private firms to help people switch.

It’s a worrying trend. Even those with partial disabilities, such as backache and diabetes, generally never work again. The increase in the unemployable also skews the data. Last month it helped the unemployment rate fall to 7.6 percent. Adjust the participation rate to the level 12 months before, and it jumps to 8.3 percent.

It’s just one month’s data, and it’s not all bad. Revisions to previous months’ figures produced an additional 61,000 jobs and most sectors showed moderate strength – although retail lost 24,000 jobs, possibly a delayed effect of the payroll tax increase.

But the rise in the long-term unemployed adds costs to the economy. And it does not lend itself to being fixed by either monetary or fiscal stimulus. Even if job gains pick up again, it’s a serious hindrance to reaching full employment.

U.S. nonfarm employment rose by 88,000 on a seasonally adjusted basis in March, according to an April 5 report from the Bureau of Labor Statistics. The unemployment rate fell by 0.1 percentage point to 7.6 percent. January and February employment figures were revised up by a total of 61,000 jobs. The labor force participation rate fell 0.2 percentage point to 63.3 percent, the lowest reading since 1979 and 2.7 percent below the December 2007 level.
Professional and business services added 51,000 jobs in March, construction added 18,000 positions, healthcare 23,000 and food service 13,000. The retail trade lost 24,000 jobs and government employment declined by 7,000.
In all, 8.9 million people were receiving disability benefit in March 2013, according to the Social Security Administration, or 3.6 percent of the civilian non-institutional population.