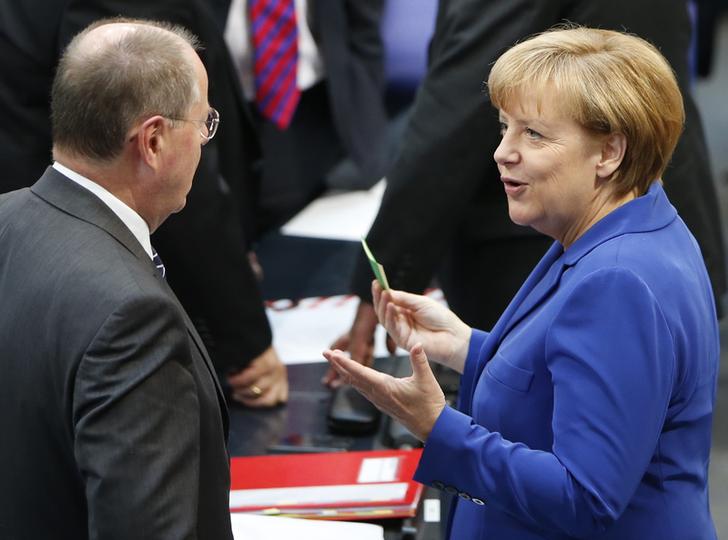 The most obvious symbol of the continuity Angela Merkel has wanted to showcase with her third cabinet is Wolfgang Schaeuble, who will keep his job as Germany’s Finance Minister in the new ruling coalition. That clearly shows that Berlin’s European policies will remain unchanged. Other EU governments will welcome a German team committed to keeping the euro zone together – if anything even more so, considering the pro-European Social Democrats’ influence in the new government.

Germans will have some reasons to be less impressed. Merkel made concessions to the Social Democrats that put the country’s already dismal long-term growth at risk. The SPD will control the economic and labour ministries. It is keen to implement many feel-good welfare policies – probably the reason why SPD party members so overwhelmingly voted in favour of the coalition’s platform.

Plans for pension reform are particularly misguided. The new government wants to soften the transition towards longer working lives. Workers who have been in the labour force for 45 years will get their full pension at 63 instead of 65. That concerns 17 percent of new pensioners each year. On average, each will get an additional transfer of 30,000 euros. Mothers and low-income workers will also get higher pensions.

The reform will increase annual pension outlays by five percent, or 12 billion euros by 2015, economic think tank RWI estimates. This will drive up social security contributions or taxes and will be at best a macro-economic zero-sum game. Given the rapid ageing of Germany’s population and the increasing lack of skilled workers, higher incentives for early retirement are irresponsible.

Waiving regional flexibility for the new minimum wage of 8.50 euros is similarly reckless. In Western Germany, where productivity and wages are high, the new law will do more good than harm. In the east, however, 27 percent of workers will be eligible – almost twice as many as in the West. A lot of them may lose their jobs.

The biggest irony is that the structural reforms designed and implemented by Merkel’s Social Democratic predecessor Gerhard Schröder will be partly undone at the behest of the SPD. That may please the recalcitrant party base for now. But in the long run, the German economy will have to pay the price of coalition politics.

German Chancellor and leader of the Christian Democratic Union (CDU) Angela Merkel talks with Peer Steinbrueck (L) of the Social Democratic Party (SPD) prior to a constitutional meeting of the Bundestag, Germany's lower house of parliament, in Berlin October 22, 2013.

The German parliament will formally confirm Angela Merkel as the country’s Chancellor on Dec. 17 after her coalition partner, the Social Democrats, received a strong backing for the coalition agreement by its party base over the weekend.

Wolfgang Schaeuble will remain Finance Minister, while SPD party leader Sigmar Gabriel will become Minister for the Economy and Energy. The SPD’s secretary general Andrea Nahles will become Labour Minister. Jörg Asmussen, member of the ECB’s governing council, will leave the central bank and become one of Nahles deputies. The Foreign Ministry will be headed by Franz Walter Steinmeier (SPD), who already held the office from 2005 to 2009.