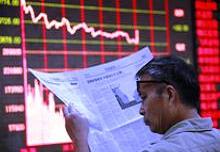 Investors driven by weak global growth, low interest rates and strong Asian finances have sought shelter in the region’s bonds. But Asia’s growth hasn’t fallen as fast as feared. If the U.S. or China move to revive growth, those bonds could prove vulnerable to a brightening mood.

An investor reads a newspaper in front of an electronic board showing stock information at a brokerage house in Huaibei, Anhui province September 19, 2011. REUTERS/Stringer

China’s exports in July rose 1 percent from the same month a year ago, the country’s customs bureau said on Aug. 10, the weakest pace since a rare decline in exports in January. New loans from banks, meanwhile, dropped to 540.1 billion yuan ($85 billion), the lowest level in 10 months, according to the central bank. And factory output in July rose 9.2 percent, its slowest pace in three years, the statistics bureau said on Aug. 9.
South Korea’s central bank held its benchmark interest rate at 3 percent on Aug. 9, after surprising markets in July by making its first cut since the global financial crisis despite what it said was weakening growth momentum and low inflation. Twenty analysts surveyed by Reuters after the central bank’s news conference forecast that it would cut the policy rate next month.