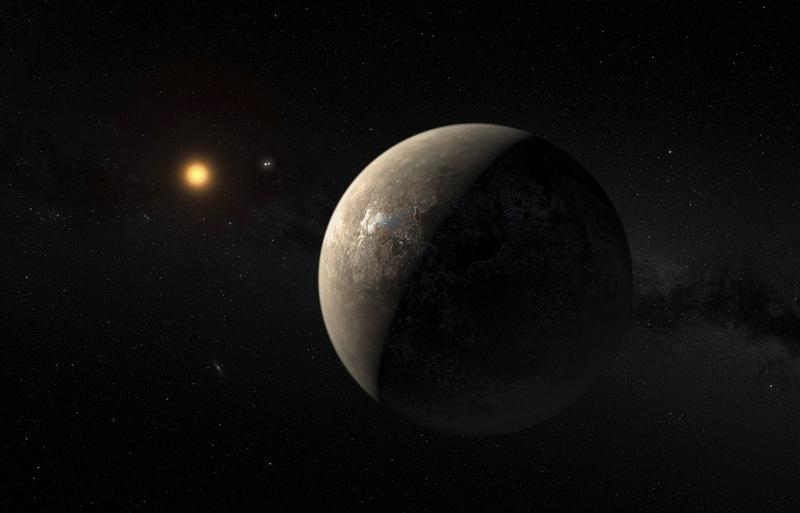 It’s not every day scientists discover a feasibly Earth-like planet at a distance that just might allow a round trip within a human lifetime. That’s the possibility raised by a study published in Nature on Wednesday. Technology titan Yuri Milner is already funding research into super-fast spacecraft that could get to Proxima b, as it’s called, within a couple of decades. The idea of making the world a better place is a Silicon Valley cliché. Visiting a new one would deliver on the promise.

Proxima b orbits Proxima Centauri, a small red-dwarf star in the three-star Alpha Centauri system. At a little over four light-years away from Earth, it would take 30,000 years to get there at current space-travel speeds. The technology being explored by Milner’s Breakthrough Starshot project, however, which also is supported by physicist Stephen Hawking and Facebook founder Mark Zuckerberg, might get there in about 20 years.

The caveats are many. Sure, the newly identified planet is in a sweet spot where water could exist in liquid form and it may conveniently be about 1.3 times the size of Earth. But it is also rather close to a dim, reddish-colored star likely to zap it from time to time with massive X-ray flares. It could orbit in such a way that one hemisphere is scorched and the other cold. And whether it has a life-supporting atmosphere is unknown.

Even so, it’s a fillip for further scientific enquiry. Meanwhile, a paper published earlier this month by a team from Harvard University and elsewhere, backed by the Breakthrough Starshot initiative, suggests there are methods that might protect tiny spacecraft traveling at a fifth of the speed of light against catastrophic damage and heating caused by collisions with interstellar gas and space dust.

For all that, this potential new world is far beyond the reach of today’s unmanned space vehicles, never mind those that might transport people. Yet although technology’s leading lights tend to overstate the extent to which they can change the world, some of them – including Elon Musk of Tesla Motors and SpaceX fame – refuse to be constrained by limits others accept. If Musk, Milner and others press on, they could make not one but two worlds better places.

The planet Proxima b orbiting the red dwarf star Proxima Centauri, the closest star to our Solar System, is seen in an undated artist's impression released by the European Southern Observatory August 24, 2016.

Scientists have discovered a planet that appears to be similar to Earth circling Proxima Centauri in the star system closest to the sun, potentially a major step in the quest to find out if life exists elsewhere in the universe, research published on Aug. 24 showed.

The planet, known as Proxima b, is located about 4.2 light-years from Earth, or 25 trillion miles (40 trillion km) away. It is the closest of some 3,500 planets that have been discovered beyond the solar system since 1995, according to the paper.

Future studies may reveal if any atmosphere contains tell-tale chemicals of biological life, such as methane, according to the paper published in the journal Nature.

Yuri Milner, the Russian physicist-turned-internet entrepreneur, on April 12 announced a $100 million initiative to send thousands of tiny spacecraft to the Alpha Centauri system, where Proxima Centauri is the smallest of three stars.

The so-called Breakthrough Starshot initiative envisions sending a large number of small "nano-crafts" at a fifth of the speed of light, more than 1,000 times faster than today's fastest spacecraft. Assuming negligible time spent accelerating and decelerating, the spacecraft could reach Alpha Centauri and send pictures to Earth within about 20 years.