News of the Whirled 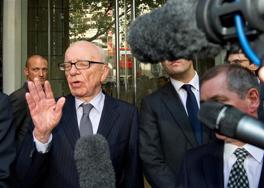 News Corp has found yet another way to annoy investors. The seemingly tardy discovery by Rupert Murdoch’s family empire that non-U.S. holders control 36 percent of its voting stock – breaching the 25 percent limit for owners of American television broadcasters – has led it to suspend half the voting rights of overseas owners. Even shareholders resigned to disenfranchisement have cause to worry.

They’ll be used to the control exerted by Murdoch. Owners of the company’s more numerous A shares don’t get a vote at all on most things. And voting B share investors are up against the family’s nearly 40 percent stake. In a tacit admission the conglomerate cocked up the monitoring of its shareholder register, the Murdochs agreed not to go beyond that percentage in any vote, even though foreign investors will now only have half the votes they had before.

All the same, the suspension may needle affected shareholders, including the retail and institutional bases in Murdoch’s native Australia. But what’s really galling is the bungle itself. The Fox TV franchise and other channels in the United States are critical to News Corp’s business, and they depend on licenses from the Federal Communications Commission.

Those licenses in turn rely on the company staying within shareholding and voting rules. While it seems to have done so with ownership of A and B shares combined, it looks as if the voting aspect escaped the company’s investor relations and legal teams – until now, when license renewals are looming.

The UK phone-hacking scandal and all that it wrought, including the departure of News Corp’s general counsel last summer, may have been a distraction. And all that followed a series of other missteps, like overpaying for Dow Jones and MySpace. But Murdoch should be acutely aware of the FCC’s U.S. ownership requirements. News Corp’s antipodean origins created headaches in the mid-1990s over the original acquisition of U.S. stations, with a waiver eventually being granted.

Any such accommodation looks improbable now. All News Corp shareholders would be harmed if the company lost its licenses because of the oversight. Yet it is characteristic Murdoch justice that those least responsible for the error have to suffer to stop that from happening.

News Corp, the media group led by Rupert Murdoch, said on April 18 it was suspending the voting rights of 50 percent of the company’s B shares held by non-U.S. stockholders. The company said its board approved the move “in order to secure compliance with applicable U.S. law, which states that no broadcast station licensee may be owned by a corporation if more than 25 percent of that corporation’s stock is owned or voted by non-U.S. stockholders.”

News Corp, which owns licenses in connection with its 27 U.S. television stations, said it had determined that approximately 36 percent of its voting B shares are held by non-U.S. persons, while about 22 percent of the combined total of B shares and usually non-voting A shares are foreign-owned.

The company said Murdoch family interests had agreed not to vote their stock to the extent doing so would increase their percentage voting power beyond what it was prior to the suspension. The family interests hold 39.7 percent of the company’s B shares.