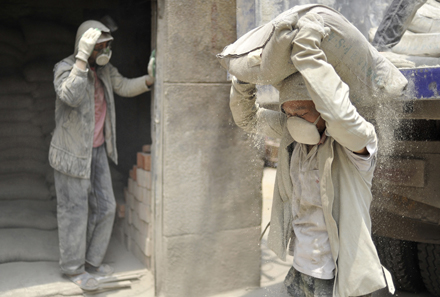 Nigerian billionaire Aliko Dangote is seeking a London listing for his $11 billion cement company. It is a watershed moment for Nigeria, and for Africa. There are significant governance hurdles, and Dangote’s plan to build a pan-African aggregates champion isn’t without risks. But the prospect of a FTSE 100-sized Nigerian company is worth celebrating.

Several years of strong economic growth, powered by the commodities super-cycle, have renewed investors’ interest in the world’s poorest continent. Africa has seen false starts before, but the rise of China, which has been investing heavily in the region, raises hope that Africa’s economic development might be getting some heft.

For investors, it is not easy getting focused exposure to sub-Saharan Africa. The usual suspects, miners like Anglo American and Lonmin, the insurer Old Mutual and brewing giant SABMiller – either have footprints that extend well beyond their home turf or have share prices that depend more on China’s economic growth than Africa’s. Zambeef, the AIM-listed Zambian beef producer, and Lonrho, the recently revived rump of Tiny Rowland’s century-old African conglomerate, offer direct plays on the continent. But they weigh in at less than 2 percent of Dangote Cement’s expected market cap.

While Nigeria has a poor reputation, Dangote is a company which could find good investment demand. It would easily be big enough to qualify to membership of the FTSE 100, though it remains to be seen whether it will comply with all of London’s index-inclusion criteria.

After recent debacles at the likes of ENRC and Bumi, corporate governance will be a red-hot topic. Aliko Dangote has said he would step down as chairman, however. The company is also likely to try to recruit experienced UK or European directors to supplement its largely home-grown board, which is well-regarded in Nigeria but less well known elsewhere.

There are ever-present political dangers and EBITDA margins, at 55 percent in fiscal 2011, are vulnerable. The scale of growth plan – Dangote wants to expand last year’s eight million tonnes of production capacity to 48 million tonnes by 2015 – is hardly without risk either. But if the price is right and the company meets London’s corporate governance standards, Dangote could prove a breath of fresh air from a too-often troubled continent.

A worker carries a sack of cement on his shoulder

Africa’s richest man plans to list his $11 billion cement business on the London Stock Exchange next year, the Financial Times reported on April 2. Nigerian billionaire Aliko Dangote said he would float a 20 percent stake in Dangote Cement as it embarks on an ambitious expansion in Africa.
The float would involve existing shares held by the group’s unlisted parent company, and is not expected to raise new capital. The plans come as Dangote intends to expand its annual cement production capacity from 8 million tonnes in 2011 to 48 million tonnes by 2015 through a series of projects funded from existing cash flows.
Dangote Cement is one of several companies in the broader Dangote conglomerate, whose interests span agriculture, food, manufacturing, logistics and real estate.
Dangote Cement’s Lagos-listed shares have lost 14 percent of their value since the company floated a 5 percent stake on the Nigerian Stock Exchange last year. The group is the biggest company in Nigeria by market capitalisation, accounting for about a quarter of the exchange’s listed market cap, according to BGL Securities, a Nigerian brokerage.