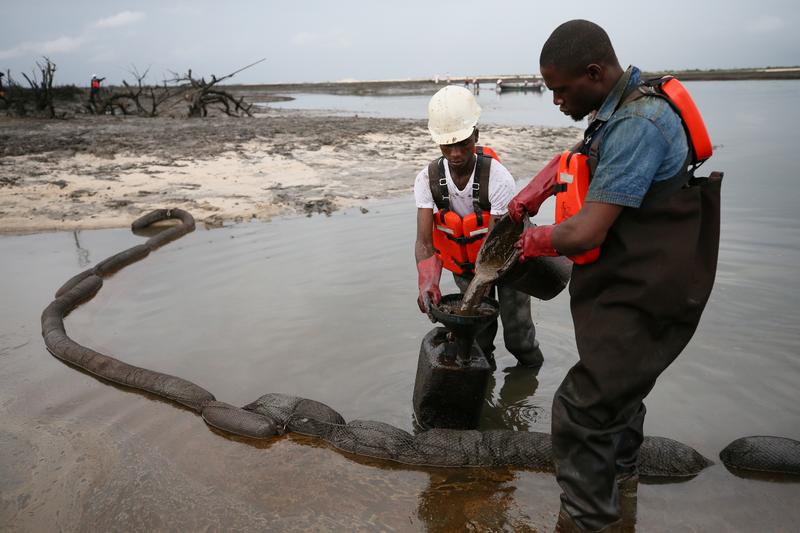 That’s how much Africa’s top crude producer wants big oil companies like Shell and Exxon Mobil to cough up under a review of 1990s contracts. In theory Abuja could seize output. In reality it’s sending a message ahead of talks over deep-water production licences due for renewal.

Workers fill a plastic container with recovered crude oil, after the flushing of the contaminated shoreline at the Bodo clean-up site in Rivers State, Nigeria November 1, 2017. Picture taken November 1, 2017.

Nigeria is looking to recover up to $62 billion from international oil companies after a domestic court ruling that the government says lets it increase its share of revenue from production-sharing contracts, Bloomberg reported on Oct. 9.

The 1993 law overseeing oil production allows for a review of revenue-sharing once oil prices rise above $20 a barrel. This has not happened, even though oil has been above that price since 2002.

Central Bank Governor Godwin Emefiele told Reuters on Sept. 23 the companies - Royal Dutch Shell, Exxon Mobil, Chevron, Total and Eni – had deliberately dragged their feet over reviews of the contract. He did not reveal the size of the claim. However, Attorney General Abubakar Malami described it as “colossal” and said court cases were already underway.

A spokesman for Shell disputed the legal basis of the government’s claim. Eni, Total and Chevron did not respond to requests for comment.