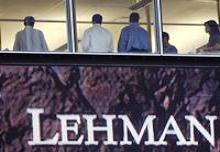 While not as cataclysmic as the failure it faced in 2008, the investment bank is being squeezed hard at Barclays. Original rescuers Bob Diamond and Skip McGee are both gone. The new U.S. leadership will have to redouble efforts to avoid the legacy of a sprawling diaspora.

People stand next to windows above an exterior sign at the Lehman Brothers headquarters in New York in this September 16 2008 file photo.

Barclays expects the core investment bank to constitute no more than 30 percent of total group RWAs by 2016, compared to over 50 percent now.

The bank also revised several other targets upwards. It said its fully loaded core Tier 1 ratio would exceed 11 percent by 2016, and its leverage ratio would exceed 4 percent by the same date. Return on equity is projected to be above 12 percent in 2016, while the drag from the bank’s non-core division is targeted to be below 3 percent.