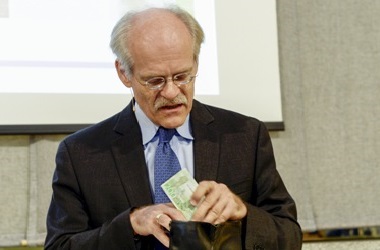 Were negative policy interest rates fatal for banks, Swedish and Danish ones would have been hardest hit during the recent rout in financial shares. After all, central banks in these countries cut rates below zero a while back. Instead, they outperformed. The snag for European and Japanese peers is that Nordic strategies for surviving abnormally low rates are hard to copy.

Scandinavian banks’ resilience to low rates is based on three pillars. Danske, Nordea, Skandinaviska Enskilda Banken, Svenska Handelsbanken and Swedbank have taken pains to put themselves on a rock-solid footing. Their core equity Tier 1 capital ratios range from 15.4 percent to 24.1 percent, against a European median of 12.3 percent, Barclays research shows. That’s partly because Nordic banks have a high level of loans relative to their deposits, and partly a legacy of lessons learnt after the domestic banking crisis of the early 1990s.

Second, big Nordic lenders are focusing on banking services that are less sensitive to interest rates and which generate fee and commission income, such as asset management products. Third, they have cut costs. UBS analysts estimate Nordic banks’ cost/income ratio will be just over 40 percent in 2016, compared with more than 50 percent for those in Italy, the Benelux countries or Austria, and roughly 75 percent for Germany.

Shareholders benefit. The four Swedish banks achieved a return on equity of 12 to 14 percent in 2015, despite the higher equity base, and propose to distribute 70 to 75 percent of net income for 2015 to shareholders, Fitch analysts say.

Yet even if a European rival had all these advantages – and not many do – Nordic banks have idiosyncratic benefits. Swedish banks were able to widen margins on new mortgage lending by about 30 basis points last year, according to UBS. It helps that a relatively high proportion of mortgage rates are reset at regular intervals and that the housing market is booming. It may be hard to replicate this in countries where mortgage rates are fixed for much longer periods or where the real estate market is more subdued.

Yield curves are also steeper in Sweden than in Japan or the euro zone. Ten-year Swedish government bond yields are 112 basis points above two-year ones. The comparable yield difference is 19 basis points in Japan and 76 basis points in Germany. Borrowing short term and lending long term is therefore more profitable for Swedish banks.

Banks in the euro zone and Japan may well be able to weather sub-zero rates. But they are less well protected against the chill winds than their Nordic peers.

Sweden’s key policy rate was cut to below zero in February 2015 and is currently minus 0.5 percent.

Stefan Ingves, the head of Sweden's central bank, the Riksbank, pulls a new SKr200 bank note from his wallet at a news conference in Stockholm, October 1 2015. REUTERS/Pontus Lundahl/TT News Agency

Sweden’s key policy rate was cut to below zero in February 2015 and is currently minus 0.5 percent.