Can’t put it down 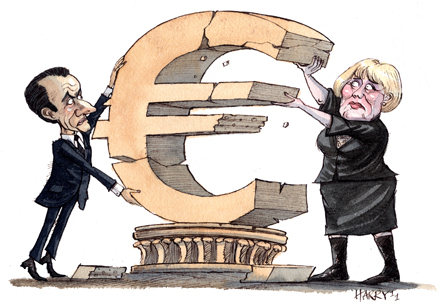 The Tale of Hellenic Foolishness appears to be over. A mix of writedowns and new money, with more of the latter, has come to the rescue. Greece’s chapter in the financial crisis epic reads much the same as the prologue on subprime mortgages – too much foolish lending ends in a sudden stop that threatens to destroy global finance, until finally there’s a political rescue.

The story continues. The financial system remains distorted and dangerous. While banks are better capitalised and perhaps more prudent, policy interest rates are abnormally low and government deficits and commodity prices are abnormally high. The U.S. trade deficit, which fell from 5.1 to 2.7 percent of GDP during the crisis, is back up to 3.6 percent of GDP – adding $560 billion a year to the wild flow of funds around the world’s capital markets.

Where does the saga go from here? Another primarily financial episode, like the subprime debacle, wouldn’t be fantasy. The obvious plotlines are a creditors’ run from the United States or a shortage of buyers of Japanese government debt. “Oil Flameout” – a sudden spike followed by a disastrous fall – is another convincing scenario. Such problems can be solved by the same force which caused them, cheap money. After almost four years of experience, governments know the rescue drill.

Another euro zone-style financial-political crisis would pose greater challenges. Many nations are vulnerable to sharp changes in the prices of commodities and financial assets, or in the availability or cost of credit. The next chapter could be “Russia Topples” or “China Discovers the Downside of Capitalism”. “Euro Redux” is still a risk. “New American Revolution” is less likely, although self-defeating populist economics are appealing in a land where many mortgages remain underwater and unemployment is still high.

It’s not possible to jump to the last page to see how the story ends. But there’s a title for an epilogue about a world that uses finance to solve the problems that finance itself creates: “Inflation Everywhere”.

Greece averted the immediate risk of an uncontrolled default on March 9, winning strong acceptance from its private creditors for a bond swap deal which will cut its public debt and clear the way for a new international bailout.

Greece averted the immediate risk of an uncontrolled default on March 9, winning strong acceptance from its private creditors for a bond swap deal which will cut its public debt and clear the way for a new international bailout.