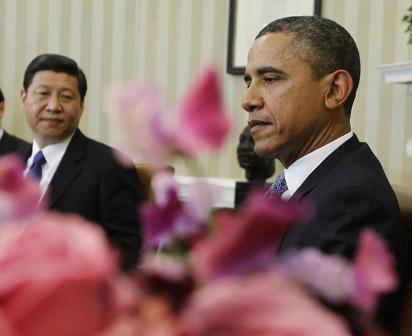 If the emperor fulfils his role by sitting and facing south, Confucius said, all else will fall into place. Presidents Obama and Xi should heed the ancient sage when they meet at a resort in the California desert on June 7. The United States and China have emotive issues to work out. In public, however, harmonious inaction is the best policy.

Hacking is the first issue about which they should say nothing. American companies allege Chinese rivals steal their data, with state backing. It’s a serious problem, but the driving force is largely economic: Chinese companies want what American ones have. Ultimately, rampant data theft will harm China’s own online economy. Xi and Obama may pledge to uphold the law when it is broken, but gain little from unenforceable ultimatums.

Then there’s trade. China faces tariffs for dumping; its trade surplus, restricted access to markets, and managed currency rankle. But the economic imbalances are slowly shifting: China’s overall trade surplus has barely grown since 2009. To become a wealthy nation, China must move away from its dependency on exports, and expose its national champions to competition. In the meantime, the best thing the leaders can do is not inflame nationalists who want markets closed, and tariffs raised.

Military issues are harder to resolve – and therefore even more worthy of silence. China has staked out islands also claimed by Japan and the Philippines. The U.S. has jangled nerves with its talk of an “Asian pivot”. But Xi and Obama can do no better than they have with China’s quest for sovereignty over Taiwan: studiously ignore it, at least in public, knowing the alternative is war. Neither leader can afford to feed the hawks.

So what should they discuss at their poolside retreat? Perhaps how much progress their relations have made. Formerly, when China’s leaders met with their counterparts, Eastern wariness and Western moralizing were palpable. Xi and Obama meet as something approaching equals. If the leaders of the world’s two biggest powers do no more than get along, the world should raise a glass of pina colada.

U.S. President Barack Obama (R) is pictured alongside China's Vice President Xi Jinping during their meeting in the Oval Office of the White House in Washington, February 14, 2012

Presidents Barack Obama and Xi Jinping are set to meet in California on June 7, their first meeting since Xi was named China’s head of state.
The meeting is scheduled to take place in California, at the Sunnylands estate in Rancho Mirage.
(Research by Robyn Mak)