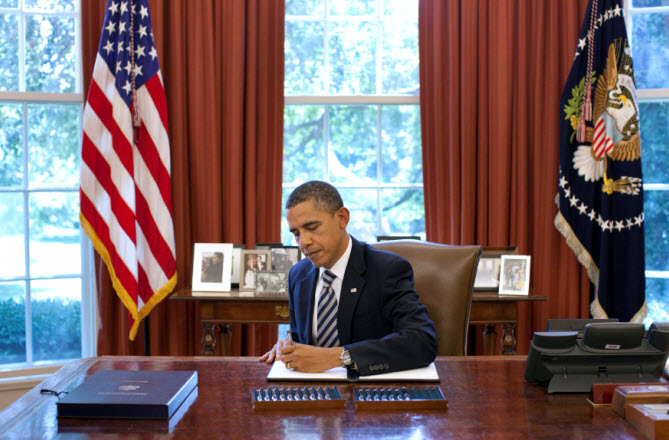 With U.S. unemployment hovering above 9 pct, Alan Krueger – a Princeton labor market expert – is suited to be the next White House chief economist. But his job creation ideas may not get much of a hearing. With Obama campaigning, political pros will have the president’s ear.

U.S. President Barack Obama signs the Budget Control Act of 2011 in the Oval Office at the White House in Washington, August 2, 2011. U.S. Senate approval on a 74 to 26 vote of the $2.1 trillion deficit-reduction plan, already passed on Monday by the Republican-controlled House of Representatives, drove away the immediate specter of a catastrophic U.S. debt default. President Barack Obama immediately signed the bill into law, lifting the government's $14.3 trillion debt ceiling hours before a Tuesday midnight deadline. But the rancorous debt and deficit battle between his Democrats and their Republican rivals left Obama politically bruised as he heads into a campaign for a second term in 2012.

Krueger served in the Obama administration as a Treasury Department economist but left that job to return to Princeton last fall.

The nomination requires Senate confirmation but Krueger has an advantage because he has gone through the confirmation process before for his Treasury job.

At Treasury, Krueger was assistant secretary for economic policy and chief economist. He is also a veteran of President Bill Clinton’s administration, serving as chief economist for the Department of Labor from August 1994 to August 1995.

Krueger holds a Bachelor of Science degree in industrial and labor relations from Cornell University. He earned his PhD in economics at Harvard University.