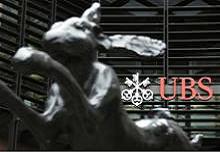 UBS is next up in the Libor stocks, and the Swiss bank’s investors will be nervous. When Barclays became the first bank to admit fiddling the London interbank offered rate back in June, the ensuing reputational firestorm forced out both its chairman and chief executive. But even though UBS’s fine is expected to be more than double Barclays’ $450 million hit, the fallout could still be worse for other banks.

The detail of the settlement with Swiss, UK and U.S. regulators should be published on Dec. 17. Until then, it can’t be judged whether UBS received a weightier fine because Barclays benefited from going first or because UBS’s wrongdoing is worse. Either way, the Swiss bank has a basic advantage. The current management team cannot be blamed for poor oversight, because it wasn’t there when the fiddling took place. And unlike Barclays under ex-chief executive Bob Diamond, UBS’s decision to take the axe to its fixed income division shows it is already making major changes.

Whatever the UBS story, though, its bigger fine is still bad news for those banks, including Royal Bank of Scotland and Deutsche Bank, which haven’t yet settled. The standard of financial pain has now been raised, according to a person familiar with the situation. Higher fines will further erode already meagre returns.

And for peers, as for Barclays, the reputational hit could be worse than the financial. Investors had expected most of the miscreants to try to limit future non-financial fallout by all settling at the same time. The inability to make this happen means that every fresh Libor settlement will gain maximum publicity and reinforce the public suspicion that the banking sector, with its punishments for money-laundering and mortgage insurance mis-selling as well as Libor, is systemically flawed.

Some banks, including UBS, can claim that major structural shifts show they are changing their spots. But others are still led by people who held senior positions before the 2007/2008 financial crisis. For those institutions and leaders, including Deutsche Bank’s Anshu Jain, 2013 may be another chastening year.

UBS is expected to face fines of $1 billion for attempts to manipulate London Interbank Offered Rates, Reuters reported on Dec. 13. A settlement with U.S, UK and Swiss regulators could come on Dec. 17.

The offices of Swiss bank UBS are seen in the financial district of the City of London October 31 2012. REUTERS/Chris Helgren

UBS is expected to face fines of $1 billion for attempts to manipulate London Interbank Offered Rates, Reuters reported on Dec. 13. A settlement with U.S, UK and Swiss regulators could come on Dec. 17.