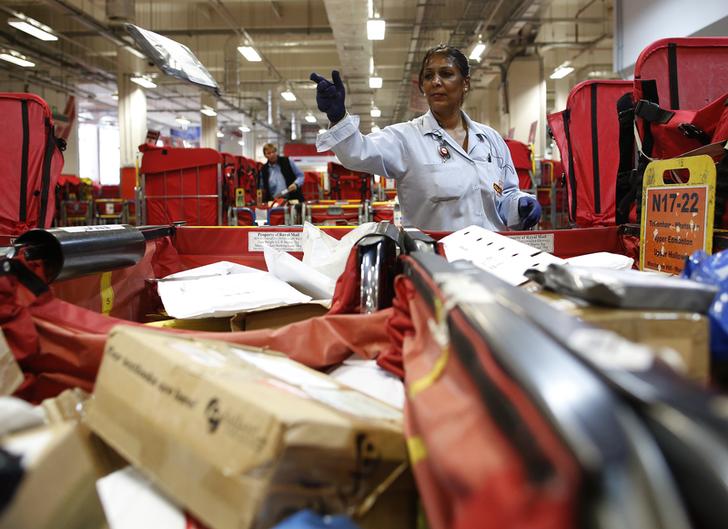 Package delivery is one of the few sources of growth for the UK postal company. But online giant Amazon is now doing its own shipping, leading Royal Mail to cut its revenue aspirations in parcels from 4 pct to 1-2 pct. Grim trading reality is out of kilter with the share price.

Postal worker Jess Kaur, who has worked at the Post Office for 13 years, sorts parcels at Mount Pleasant sorting office in London July 26, 2013.

Royal Mail, the UK postal service, said on Nov. 19 that its annual rate of growth in parcel delivery was likely to be limited to between 1 and 2 percent for the next two years. Previous hopes were that Royal Mail revenue from parcels would grow at 4 percent a year.

On the same day, Royal Mail said its profit fell in the half-year to Sept. 28. The overall pretax figure, including a large pension-related gain in 2013, slumped from 1.58 billion pounds ($2.47 billion) to 167 million pounds. Operating profit, excluding items defined by the company as non-recurring, fell 21 percent to 279 million pounds. Earnings before interest and tax, excluding one-off items, fell 18 percent to 218 million pounds.

Underlying earnings per share, however, rose 0.5 pence to 16.8 pence largely because the company replaced loans from the British government with new debt. As a result of the move, Royal Mail said its blended interest rate had fallen from 8.8 percent to 3 percent.