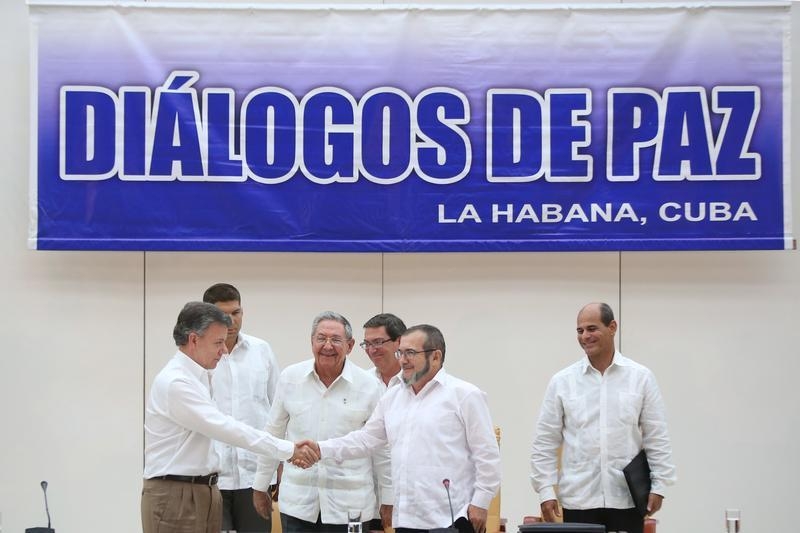 Colombia’s government may be about to discover that peace and fiscal virtue don’t necessarily mesh. The Andean state is on the verge of ending a half-century-long war with leftist FARC rebels that has killed 220,000 people and displaced millions. Recovering from the conflict may cost up to $3 billion a year. That would not have posed that much of a dilemma for Latin America’s fourth-largest economy – until recently.

The plummeting oil price over the past year has taken its toll. Crude is the country’s biggest export, accounting for roughly a fifth of the government’s budget. Its contribution in 2015, though, is set to more than halve to $3.2 billion from $6.6 billion, according to finance ministry data. As a result, the economy has slowed. The central bank now estimates GDP will grow by 2.8 percent this year, compared to the annual expansion of at least 4 percent since President Juan Manuel Santos took office in 2010.

Santos has developed a deserved reputation for being careful with the country’s purse strings. His administration has already responded to this year’s oil-driven slowdown by cutting $2 billion from spending.

The pledge that he and top FARC commander Rodrigo Londoño made last month to end their country’s war within six months comes with a price, though. Minefields will need clearing. Widespread mental trauma will need proper treatment. Former fighters will need help to avoid being sucked into gangs and crime.

Santos reckons the cost of a lasting peace will be “minimal,” as his government already funds some reparations and programs to rehabilitate ex-combatants. Much-needed infrastructure investment to boost productivity and fight poverty will be funded by public-private partnerships that won’t directly affect the country’s budget. Some may come from abroad, as his finance minister says he will seek “significant” international contributions to pay for peace.

There would be some justice in asking for reconstruction help from countries whose citizens buy another of Colombia’s exports – cocaine, which helped fund FARC. But that may end up being more hope than substance. Failure to get it could leave Santos and his self-described “very strict” approach to fiscal discipline in a dilemma.

Colombian President Juan Manuel Santos and top FARC rebel commander Rodrigo Londoño pledged on Sept. 23 to end their country’s 50-year war within six months. Santos and Londoño, better known by the nom de guerre Timochenko, also agreed the leftist guerrillas would lay down arms within 60 days of signing the deal, which now has an official deadline of March 23, 2016. The two sides agreed to create special tribunals to try former combatants, form an amnesty that would exclude those who committed war crimes or crimes against humanity, and provide reparations for victims. A smaller leftist rebel group, the ELN, has yet to agree to full negotiations with the government.

Colombia’s central bank estimates 2015 growth of 2.8 percent, down from 4.6 percent last year. The finance ministry meanwhile projects oil revenue of 9.6 trillion pesos ($3.2 billion) this year, down from 19.7 trillion pesos ($6.6 billion) in 2014. The Colombian peso has weakened about 50 percent in the last 12 months to around 3,000 to the dollar.

The central bank, seeking to stem inflation, raised its benchmark interest rate a quarter point on Sept. 25 to 4.75 percent. Twelve-month inflation was above the bank’s target range of 2 percent to 4 percent in August, reaching 4.74 percent. The rate hike was the first in a year.