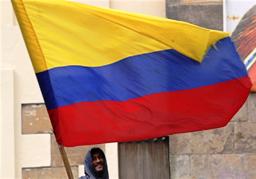 President Santos may start talks with FARC guerillas. Thanks to improved security, Colombia has already seen what amounts to a peace dividend. Still, lower military costs would further improve its finances, and coaxing fighters out of the jungle could boost economic confidence.

The opportunity to open talks comes more than 10 years after a failed attempt at peace under the presidency of Andres Pastrana.

A successful peace agreement with the rebels would secure Santos a place in history as the leader who ended a conflict that has killed tens of thousands of people over the years.