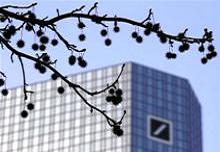 Actavis’s 2007 buyout, by Icelandic tycoon Thor Bjorgolfsson, belongs to a different age. Bjorgolfsson was then reckoned among the world’s richest people and the Actavis deal was worth $6.4 billion including debt – five times the value of Iceland’s biggest listed company today. Deutsche employed bubble-era tactics too. The loans totalled a reported 4 billion euros, including 1 billion of “payment-in-kind” notes. These are particularly risky, since instead of paying interest in cash the PIK-note debt burden expands.

The deal backfired. The credit crunch made the debt unsellable and Actavis wobbled, operationally and financially. Merger and sale attempts flopped. A 2010 restructuring handed Deutsche significant control, including board seats and other rights, but no equity. The bank recorded 545 million euros of “charge-offs”, and shifted the debt into a “non-core” sin bin alongside a Vegas casino. Impairment charges of 457 million euros followed in 2011.

The new owner is not doing too badly, though. Actavis had actually built a major international business through dozens of acquisitions, despite sometimes skimping on integration. Watson’s $5.6 billion offer equates to 2.3 times 2011 sales and 13.8 times EBITDA. That is roughly in line with the mean 3.3 times historic sales and 14.7 times EBITDA for generics deals, Credit Suisse data show. Watson also targets $300 million of annual synergies – about 12 percent of Actavis sales – and should reap big tax savings from combining with a firm that recently moved to Switzerland.

With limited disclosure, it is hard to gauge exactly how Actavis’s owners and creditors have fared. It is not clear what smaller creditors were owed or received. Bjorgolfsson and minority shareholders – probably including kaput Icelandic banks – presumably received something for their consent. They could receive 250 million euros more in Watson shares, depending on future performance.

For its part, Deutsche books another 257 million euro impairment, suggesting the deal did not cover even its written-down debt. The total cost of this Viking misadventure? Five years of distraction and $1.7 billion in charges.

The logo of Deutsche Bank is seen at the bank's headquarters in Frankfurt January 31, 2012. REUTERS/Kai Pfaffenbach

On April 25 Watson Pharmaceuticals, the U.S. drugmaker, said it would buy Actavis, a privately owned European rival, for 4.25 billion euros ($5.6 billion) in cash. If Actavis meets performance targets for 2012, Watson could pay up to 250 million euros more in stock.
Watson expects the takeover to close in the fourth quarter of 2012. With sales of $8 billion, the combined company will be the third-biggest maker of generic, or off-patent, drugs.
Actavis was taken private in 2007 by Icelandic tycoon Bjorgolfur Thor Bjorgolfsson. Deutsche Bank financed that $6.4 billion leveraged buyout but subsequently failed to syndicate the debt to other banks and investors. The company later relocated to Switzerland from Iceland, formally opening new headquarters in Zug in May 2011.
The debt was restructured in 2010. Deutsche did not take an equity stake but gained the right to appoint three of the seven members of the board of Actavis’s holding company, and veto the appointment of that company’s chairman.
Deutsche Bank’s 2010 annual report registered 545 million euros in charge-offs as it reclassified the loans, and gave them a carrying value of 4.2 billion euros. At the start of 2011, Deutsche moved the credit holding to its “Corporate Investments” unit, where it sits alongside other “non-core” principal investments including the Cosmopolitan casino in Las Vegas. That year Deutsche recorded impairment charges of 457 million euros.
Deutsche said on April 25 exiting its loans would trigger a further, 257 million euro impairment charge. It expects “Core Tier 1 capital accretion” of about 290 million euros when the deal closes and a roughly 6-basis-point boost to the group’s Core Tier 1 capital ratio. Deutsche said the exit “further demonstrates the group’s commitment to reducing non-core legacy positions and associated risk in a capital efficient manner.”