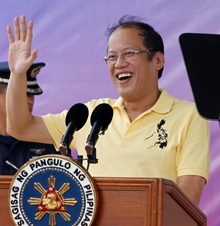 In the 1950s, the country had Asia’s highest per capita income outside Japan. Those days are gone, but growth is strong, the peso is rising, and an investment-grade rating is within reach. President Aquino needs to break the hold of oligarchs. “Sin taxes” will provide a test.

The Philippines government has invited bids for a facelift of Terminal 3 of the Ninoy Aquino International Airport in Manila. The bid for the 212 million peso ($5 million) project closes on Aug. 23, the Department of Transportation and Communications said in a statement on its website. The terminal, which was built by a consortium that included Fraport AG, was taken over by the government in 2004, sparking a lengthy legal battle.
In July, Standard & Poor’s raised the foreign-currency sovereign rating of the Philippines from BB to BB+, one level below investment grade, after the ratio of public debt to gross domestic product fell to about 51 percent last year from 84 percent in 2004 and foreign-currency reserves rose. The reserves swelled to $79.3 billion in July, a new record.
The economy grew 6.4 percent from a year earlier in the first quarter, and second-quarter growth may be even faster, Philippine President Benigno Aquino told Reuters in a July interview.