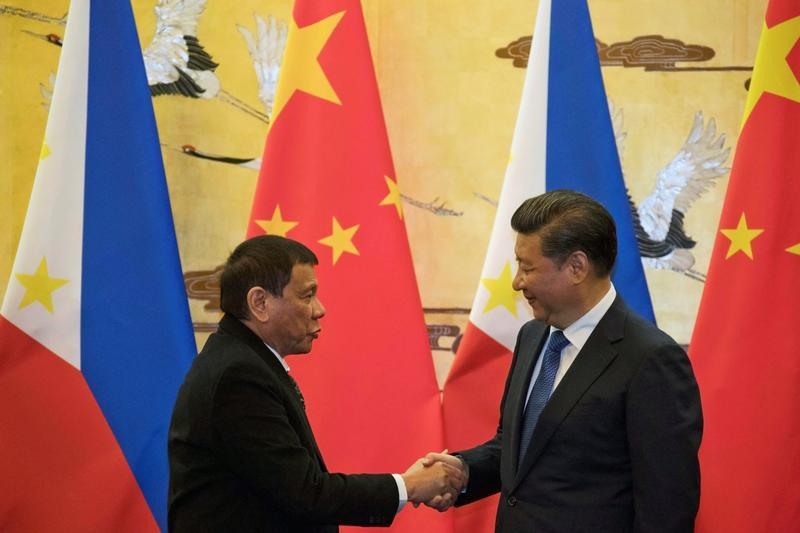 Rodrigo Duterte is following the money. The Philippine president’s boasts of ditching America for China play well in Beijing. Hard cash appears a major motivation for the foreign policy gamble; funds from the People’s Republic will help Duterte deliver on big promises.

His hard-line rhetorical rejection of a long-time ally will likely be nuanced in practice. The Philippines is yet to cancel military exercises with the U.S. or close bases. Duterte’s trade minister clarified the country is pivoting towards China, not cutting all ties with the United States.

A warmer relationship would allow the Southeast Asian nation to capitalise on the full economic support available from Beijing. Geopolitical tensions over disputed territory in the South China Sea, which have now been put aside, were a major obstacle.

Take trade. Japan has been the top partner for the Philippines in the last few years. China holds the top spot for most other countries in the region. Strengthening trade is less of an incentive for the Philippines at a time when China’s demand for imports in general remains so weak, however.

The bigger prize is foreign direct investment. Average annual inflows into the Philippines have amounted to just 1.4 percent of GDP since 2000, according to Nomura. That is more than half levels found in Cambodia, Thailand, and Vietnam. Most of the Philippines FDI comes from Japan and the United States, while China and Hong Kong accounted for just 1.4 percent of the total in 2015. That shows there is plenty of room to ramp up.

Chinese capital could help Duterte fund his plan to boost infrastructure spending to 7 percent of GDP, up from around 5 percent during the Aquino administration. That could in turn boost the tourism industry, still small relative to the size of the economy compared to, say, Thailand.

Of course, courting Chinese cash is risky. That is especially true if infrastructure built by Chinese firms proves shoddy, a common complaint. In places like Myanmar, Beijing’s economic influence is now seen as too dominant.

But if Duterte keeps U.S. relations cordial, and ensures Chinese capital is deployed sensibly, the Philippines pivot to China may not turn out to be so controversial.

Philippine President Rodrigo Duterte announced on Oct. 20 the country’s “separation” from the United States during an official visit to China.

“America has lost now,” Duterte told a delegation at a forum in the Great Hall of People in Beijing, attended by Chinese Vice Premier Zhang Gaoli.

"I will not go to America anymore. We will just be insulted there," Duterte said. "So time to say goodbye my friend.”

"I announce my separation from the United States," Duterte said to applause. "I have separated from them. So I will be dependent on you for all time. But do not worry. We will also help as you help us.”

Philippine trade secretary, Ramon Lopez, said $13.5 billion in deals would be signed as part of the visit.

Duterte on Oct. 19 said the South China Sea arbitration case would "take the back seat" during talks, and that he would wait for the Chinese to bring up the issue rather than doing so himself.

Chinese President Xi Jinping said issues that could not immediately be resolved should be set aside, according to the Chinese foreign ministry.

In July, an arbitration court in The Hague ruled that China had no historical title over the South China Sea and it had breached the Philippines' sovereign rights.