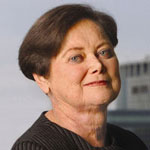 Golden West founder Marion Sandler has died aged 81. She and husband Herb built a supremely efficient mortgage lender, sold at the top and donated $1.3 bln to political and other causes. But they’ll be remembered as the architects of one of the more egregious mortgage offerings.

Marion Sandler died on June 1 at the age of 81. Along with her husband Herb she built Golden West Financial, a California-based mortgage lender the couple ran from 1963 until selling it to Wachovia for around $24 billion in 2006.

The Sandlers created the option adjustable-rate mortgage product in the early 1980s. One variant allowed borrowers to choose how much to repay each month, earning such loans the title of pick-a-pay mortgages.

Mortgage losses on both Golden West’s and its own portfolios forced Wachovia to sell on the cheap to Wells Fargo in 2008. In 2010 Time magazine put the Sandlers on its list of the 25 people to blame for the financial crisis. The Sandlers responded with a letter outlining how their option ARMs were less risky than those originated by rivals. The couple was also lampooned on Saturday Night Live.

The Sandlers pocketed around $2.4 billion from selling to Wachovia. They donated $1.3 billion of it to their foundation, which has so far distributed around $550 million. The University of California San Francisco has received more than $100 million and $80 million has gone to funding asthma research. The foundation also helped found the Center for American Progress and news and analysis site ProPublica, and donated money to the Center on Budget Priorities, Human Rights Watch and other causes.