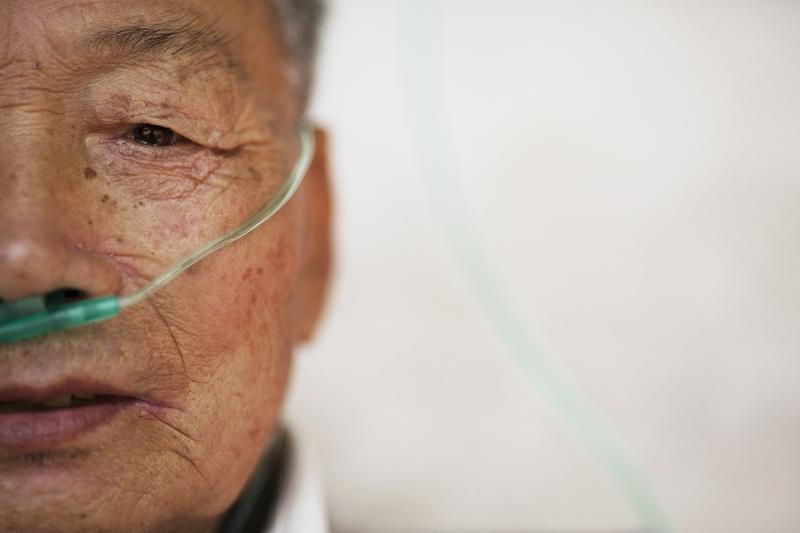 The Chinese finance giant has launched a $1 bln IPO of its medical arm. By connecting patients with doctors, drugs and health services online, the Good Doctor app supports policy while accumulating valuable data. It’s not yet profitable, but the premium looks justifiable.

Hu Hushen, a 78 year old former miner, breathes using a nasal cannula for oxygen supply outside his room at Yangjia Hospital in Wuyi County, Zhejiang Province, China October 19, 2015. Hu was diagnosed with pneumoconiosis, a disease caused by the inhalation of dust, in 1976 and stopped working the same year. The former miner decided to move to Yangjia Hospital nine years ago because it's cheap - the oxygen is free and almost everything else is covered by his insurance. Hu has needed a constant oxygen supply for past five years. At Yangjia Hospital in a remote corner of China's eastern Zhejiang province, sufferers of dust lung spend much of their time hooked up to oxygen to treat lungs ravaged by work in a local mine, since shut down. Once equipped with high-tech machinery and 150 staff, the hospital has suffered from falling numbers and a lack of funding. With some of its windows broken and certain rooms abandoned, the hospital now treats just 30 patients. It’s a close-knit community including family members, who prepare meals in makeshift kitchens, grow vegetables in the grounds and play cards to kill time. Dust lung, also known as pneumoconiosis, affects an estimated 6 million workers in China. REUTERS/Damir Sagolj TPX IMAGES OF THE DAY PICTURE 7 OF 26 FOR WIDER IMAGE STORY "HOME AND HOSPITAL FOR DUST-LUNG MINERS". SEARCH "DUST LUNG" FOR ALL IMAGES TPX IMAGES OF THE DAY - GF20000035375

Ping An Healthcare and Technology is launching an initial public offering in Hong Kong that could raise as much as HK$8.8 billion ($1.1 billion), the internet healthcare startup said at a press briefing on April 22.

The company, a subsidiary of Chinese financial services giant Ping An, is offering roughly 160 million shares at an indicative price range of HK$50.8 to HK$54.8 each.

U.S. fund managers BlackRock and Capital Group, Singaporean and Malaysian state investment funds GIC and Khazanah, the Canada Pension Plan Investment Board, insurer Swiss Re and Thai conglomerate Charoen Pokphand are together buying roughly half of the shares being sold as cornerstone investors.

Bookbuilding for the offering will begin on April 23 and end April 26. Shares will begin trading on the Hong Kong Stock Exchange on May 4. Citigroup and JP Morgan are working as joint sponsors of the IPO.

Founded in 2014, Ping An Healthcare and Technology runs Good Doctor, an app that offers healthcare services including online consultations in China. The company completed a pre-IPO investment of $400 million by Japanese technology and telecom group SoftBank in December.

Ping An owns a 46.2 percent stake in the business.