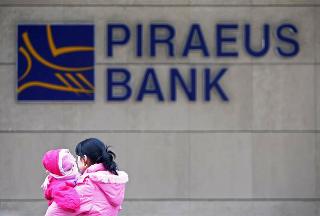 Piraeus’ new debt swap makes most sense for Hellenic bulls. The Greek bank’s debt-for-equity deal, offered to investors on Oct. 15, is a tasty prospect for those that reckon Greece is out of the woods. But those who take a more bearish stance should give it a miss.

Piraeus, which like peers needs the capital to fill a likely hole after forthcoming stress tests, is offering senior debtholders two options. One is a discounted payoff at 43 cents in cash. The other is shares in a potential rights issue, worth the same as the nominal value of their bonds.

Given Piraeus’ senior bonds maturing in March 2017 currently trade at 53 percent of par, the cash deal doesn’t sound great. The stock deal is more interesting: if the stock is issued at half book value and the shares recover to book, creditors would quadruple their money. If Greek banks can’t raise enough private money and are tipped into resolution, the Piraeus offer says bondholders that accepted the swap will be left with their original senior bonds, and no worse a fate than if they had accepted the deal.

But for those who take a more negative view of the Greek economy, moving from debt to equity is still risky. If the Greek economy goes into a tailspin next year due to austerity or reforms, the stock might suffer much worse than the senior bonds, which were trading at par before the Syriza government came to power and will be repaid at that level in two years. In a resolution, senior debt might still have value.

The swap is not quite as simple as good for bulls and bad for bears. A successful debt swap could itself entice private investors to put more money into Piraeus. Euro zone lenders, on the other hand, have already threatened to force losses on senior creditors if the banks call on government funds.

Like previous coercive bond exchanges, Piraeus’ new deal combines carrot and stick. But neither the threat nor the incentive is sufficiently powerful to make investors’ next step a no-brainer.

A woman carries her child in front of a branch of the Greek-owned Piraeus Bank in downtown Bucharest. Last Monday saw the successful conclusion of the €807.1m rights issue by Piraeus Bank in a result that shows “the game is on” for fundraisings from peripheral banks.

Piraeus Bank on Oct. 15 offered holders of senior, Tier 2 and hybrid bonds the chance to exchange their securities for new non-transferrable receipts, which will in future be swapped for either cash or shares.

In that future exchange, senior notes would receive shares, or cash worth 43 percent of the bonds’ nominal value, according to a person familiar with the swap.