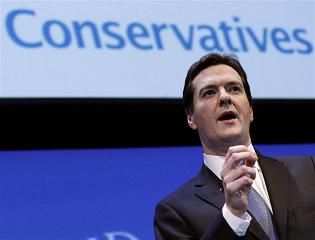 George Osborne is gazing across the Rubicon, and hesitating. It is still hard to see what exactly the UK Chancellor of the Exchequer meant when he talked about “credit easing” in his speech to the Conservative Party conference on Oct 3. But the concept looks more radical than the ill-fated Project Merlin earlier this year.

Osborne is trying to solve the major problem of funneling credit to small and medium-size enterprises (SMEs) in order to boost growth. Merlin set the banks formal lending targets. But banks could claim the demand wasn’t there.

Credit easing looks more inventive, with the Treasury shouldering the ultimate risk of loans to SMEs. The government could possibly revive the Bank of England’s 50 billion pound Asset Purchase Facility, originally intended for big companies that ended up using capital markets instead. The intention would be to lower yields by buying SME debt, with the Treasury guaranteeing any losses.

But according to a Treasury source, Osborne is also looking at ways to help banks get SME loans off their balance sheets, by selling their securitised loans to investors and guaranteeing purchasers against losses. Alternatively, he might set up a UK version of Fannie Mae and Freddie Mac, which helped establish a liquid market for U.S. mortgage-backed securities. The government is even pondering a version of the U.S. Term Asset-backed Securities Loan Facility (TALF), whereby the government could lend money to potential acquirers of SME debt.

These ideas, many of which seem to be cribbed from BoE dove Adam Posen, are all interesting. Asset purchases could be done in a way to avoid increasing the UK’s deficit, although they are still riddled with fiscal risks in case of actual losses. But the basic assumption is that the problem for SMEs is an inadequate supply of acceptably-priced loans, rather than a lack of demand in the face of gloomy economic prospects.

In spite of the government’s push, banks might still withhold credit, or make it too pricey for many SMEs seen as too risky. To get round that, Osborne could cut out the middleman entirely and adopt another of Posen’s nuclear suggestions – go into full-interventionist mode and set up a state-owned bank to offer cheap loans to small enterprises, like Germany’s KfW. But for a British Conservative chancellor, this ’Plan C’ really would be crossing the Rubicon.

The government could embark on a round of so-called “credit easing” in order to increase the supply of credit to small and medium-sized enterprises in the UK, Britain’s Chancellor of the Exchequer told the Conservative Party conference on Oct 3.
George Osborne said that HM Treasury was examining ways to free up banks to lend. One way would be to revive the Bank of England’s Asset Purchase Facility, which has already bought 200 billion pounds of gilts but has capacity to buy up another 50 billion pounds of corporate debt.
The programme could be revived as a standby if yields on corporate debt balloon to the levels seen in 2009, a Treasury source told Reuters Breakingviews. The purchases could be funded by issuing treasury bills.
Osborne is also looking at ways for banks to parcel up their small and medium-sized loans by securitisation. The government could guarantee investors who bought the bonds against losses, leaving the banks with cash to make new loans.
Another potential scheme might look like the United States’ Term Asset-Backed Securities Loan Facility (TALF), which was announced in November 2008 to lend cheap money to banks and hedge funds to enable them to buy securitised small business loans.
Osborne will announce more details on Nov. 29.