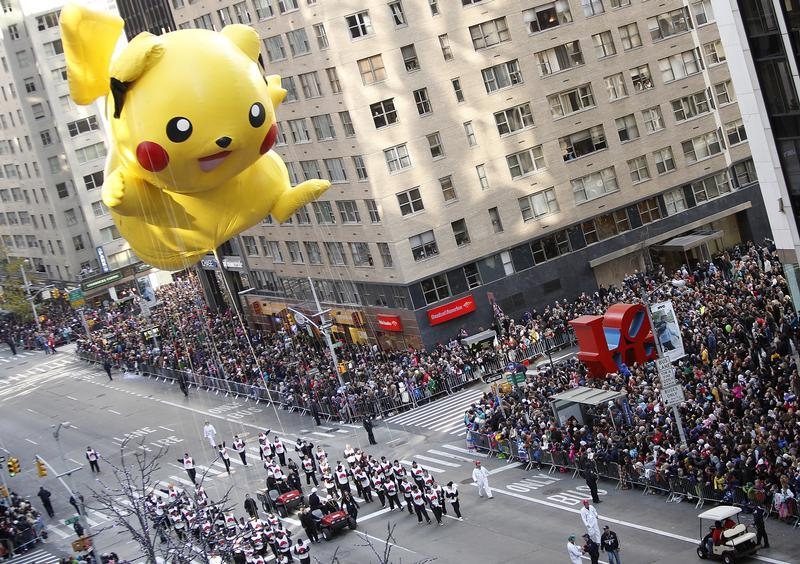 Pokemon GO’s smash success offers the first real taste of augmented reality’s promise. The mobile game created by a Nintendo affiliate may have more users than Twitter within a week of its launch. Entirely computer-simulated worlds get the attention, but overlaying the digital on the physical may actually be the more disruptive killer app.

The game is an entirely 21st-century pursuit that harnesses smartphones with high-definition screens, advanced graphics processing, geolocation, good battery life, sensors and giant databases to create an updated version of a scavenger hunt. Players walk around capturing digital characters which appear as if they are real objects when looked at through a phone’s camera. Players can then meet in certain spots and have their characters battle for dominance.

This isn’t the first app using augmented reality. Snapchat’s lenses make videos appear as if people are vomiting rainbows or underwater. The more highbrow (and less popular) SkyView allows astronomy nerds to point their phones at the sky and identify stars, planets and satellites.

The apps are already big business. Snapchat’s latest fundraising round values it near $20 billion. Pokemon GO’s success has added $7.5 billion to the value of Nintendo’s value on the Tokyo stock exchange. Yet these are only a taste of the value that is likely to be created.

Pokemon GO’s roaring start hints at the success of primitive video games like Pong or Space Invaders. In addition to capturing the public’s imagination, these games pointed to what was possible, and popularized the emerging technology of computing by making it fun.

The possibilities of imposing digital information and images on the real world are tantalizing. Architects and realtors could walk clients through a site, showing differing versions of a completed building. Mechanics may be able to look at the underside of an automotive model they have never worked upon, have each part digitally labeled and see how to fix a problem. Tourists can have signs in exotic languages automatically translated.

Trying to predict the size of this market and its progress is difficult. New markets create entirely new services at unpredictable prices, and the technology is a work in progress. But each generation of computing creates more societal impact and economic value. With worldwide smartphone sales at $400 billion annually, Pokemon GO points the way to a huge opportunity in augmented reality.

Shares of Nintendo rose more than 20 percent on July 11, extending a two-day surge since the Japanese group released Pokemon GO, a smartphone game, in the United States on July 6.

Pokemon GO is jointly developed by Pokemon, in which Nintendo owns a one-third stake, and games developer Niantic. Niantic is a spinoff from Google.

The game requires players to walk around their real-life neighborhoods while seeking virtual Pokemon characters on their phones.

Pokemon GO, which is free to download, is currently the No. 1 app on Apple's iTunes app store.