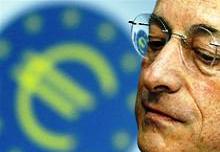 The heat is on for Mario Draghi again this week. What should have been a rather banal decision on rates will prove controversial whatever the outcome. Give credit to euro zone leaders for their ability to create drama whenever things threaten to go too quiet on the crisis front. The governing council of the European Central Bank will have to decide whether to cut rates or not at its meeting May 2. The case for doing it is a no-brainer, but euro zone politics gives the decision an intensity it shouldn’t have.

Since the last time the ECB lowered its main rate – to 0.75 percent, in July, 2012 – the euro zone slump has deepened, inflation has come down from 2.4 to 1.7 percent, and the Japanese central bank has embarked on a massive money-printing effort. Meanwhile, the euro has appreciated by 8 percent against the dollar and the pound, and 35 percent against the yen. Bond markets may have calmed down, but companies in Europe’s most challenged economies still borrow at prohibitive rates – when they do. Too much hope may be placed on the benefit of a rate cut by its vocal proponents: an incremental 0.25 percent cut, well in the ECB’s tradition, is unlikely to shake the euro zone out of its economic stupor.

Then, of course, there is Germany. Angela Merkel made headlines last week by hinting that what the German economy would rather need was a rate hike. The chancellor may have intended to simply point out how difficult the ECB’s task was, because it has to design a common monetary policy for economies that remain on diverging paths. She was being a bit disingenuous as well. As even the Bundesbank admits, the German economy is far from overheating, and inflation remains subdued. It should even be a bit higher than in the rest of the zone to allow the ECB to stick to its “below but close to” 2 percent overall inflation target.

Merkel has to contend with the growing frustration of Germans who see their savings eroded by negative real interest rates. Of course, Draghi could easily reply that guaranteeing decent returns for depositors is not part of the ECB’s remit. And that German savers will ultimately benefit from a healthier euro zone.

The European Central Bank’s governing council will hold its bi-monthly meeting on May 2 in Bratislava, Slovakia, amid wise-spread expectation of a rate cut.
The ECB last cut its main refinancing rate, to 0.75 percent, in July, 2012.

The European Central Bank’s governing council will hold its bi-monthly meeting on May 2 in Bratislava, Slovakia, amid wise-spread expectation of a rate cut.
The ECB last cut its main refinancing rate, to 0.75 percent, in July, 2012.