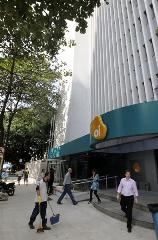 The long-anticipated 5.6 bln euro merger of the Portuguese company with Brazil’s largest fixed-line operator creates a highly indebted enterprise, even after a capital hike. And claimed synergies are punchy. But teaming up makes sense in a consolidating Latin American market.

Portugal Telecom agreed to merge with Oi, Brazil’s largest fixed-line telecoms operator, the companies said on Oct. 2.
As part of the deal, Oi will launch a capital increase of up to 2.7 billion euros. PT, already a 22 percent shareholder, will contribute its assets and own a 38.1 percent stake in the company. The deal is expected to generate 1.8 billion euros in cost savings.
The new company will have its headquarters in Brazil and be led by Zeinal Bava, the former chief executive of Portugal Telecom, and current head of Oi since June.
Portugal Telecom shares jumped 20 percent initially before easing back to trade 7 percent up at 3.65 euros in afternoon trading.
Shares in Oi rose 9 percent by midday trading in New York to 4.61 reais.