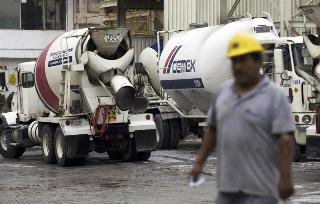 The Mexican cement giant grew mightily, but economies of scale top out quickly and transportation costs are high. The forecast loss for the latest quarter is modest, but if big losses outside Mexico continue the company’s $8.1 bln of debt maturing in 2014 will pose a big problem.

A worker walks near cement trucks of the Mexican Cemex company in Mexico City September 4, 2009. Cemex cast a shadow over the Latin American debt capital markets as it failed to do a US$650m drive-by deal last Wednesday.

Mexican cement giant Cemex is due to report fourth-quarter earnings on Feb. 2. Analysts polled by Reuters estimate the company’s net loss will be $198 million for the quarter.

Cemex, founded in 1906, began its international expansion by buying Spain’s Valcem and Cementos Sanson in 1992, Venezuela’s Vencemos in 1994, a Dominican Republic company in 1995 and a Colombian company in 1996. Between 1997 and 1999 it made major acquisitions in the Philippines, Indonesia, Egypt, and Costa Rica. In 2000 it bought Southdown for $2.8 billion to become the United States’ largest cement manufacturer. Then it bought Britain’s RMC Group for $5.8 billion in 2005 and Australia’s Rinker Group for $14.2 billion in 2007.