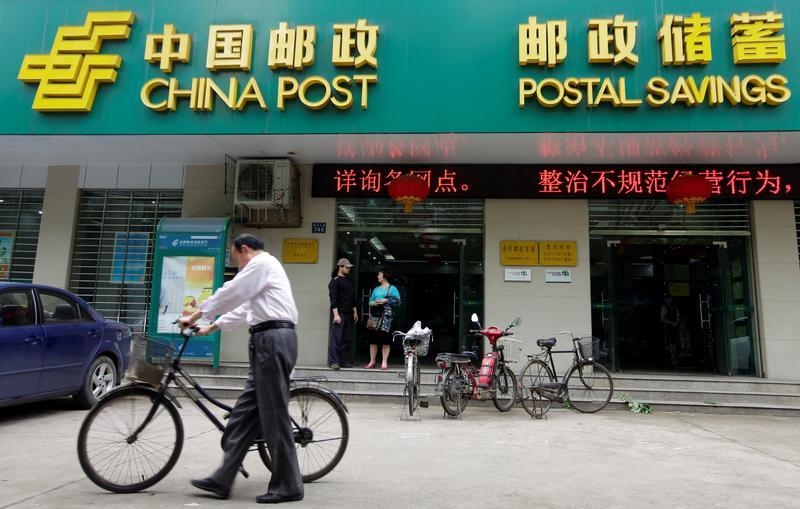 Postal Savings Bank of China’s stock market debut in Hong Kong looks likely to scrape through the door with the help of its friends despite a toppy price that would value its new shares at least $7.3 billion.

Around three quarters of its initial public offering will go to six anchor investors with a friendly state-owned ship-builder and port-operator stumping up over $4 billion. Privately owned aviation conglomerate HNA Group will subscribe to $1 billion, adding to its global acquisition spree.

At the bottom of the price range, Postal Savings would be worth just over its book value at the end of March. On a forward basis that would equate to around 0.93 times, assuming the lender can retain sufficient earnings to deliver a 9 percent pre-money boost to its net asset value by the end of the year, as indicated by a person close to the deal.

The numbers square with an understanding that Chinese state-owned banks must list at no less than their historic net asset value.

The problem is that this values Postal Savings richly relative to its peers, which mostly deliver higher returns yet trade at bigger forward discounts. The return on assets at Postal Savings in the first three months of the year was a skimpy 0.67 percent. Few rivals – internationally or domestically – get so little bang for their balance sheet buck.

The flipside is Postal Savings’ more cautious risk profile. Its non-performing loan ratio is 0.8 percent, less than half the official industry average. Analysts estimate the real level of bad loans at lenders in the People’s Republic could be as high as 15 percent. Even so, Postal Bank has far fewer loss-making state-run legacy clients, and a sticky deposit base of customers in rural areas where it is typically the only bank around.

The weight of cornerstone investors should propel this big IPO over the line. As with other state-backed listings completed at distorted valuations, reality may weigh on the share price performance in the secondary market. In its current shape, Postal Bank deserves the stamp “return to sender”.

A man pushes his bicycle past a branch of China Post's Postal Savings Bank of China in Wuhan, Hubei province May 4, 2012. REUTERS/Stringer/File Photo CHINA OUT. NO COMMERCIAL OR EDITORIAL SALES IN CHINA - RTX2ORRZ

State-owned Postal Savings Bank of China (PSBC) launched its up to $8.1 billion initial public offering in Hong Kong on Sept. 12, with the vast majority of the deal covered by cornerstone investors.

The lender, China's largest by number of branches, is offering 12.1 billion new shares in an indicative range of HK$4.68 to HK$5.18 each, according to a term sheet seen by Reuters Breakingviews.

A group of six investors agreed to buy around $5.9 billion worth of shares, the term sheet showed. The investors include CSIC Investment One Limited, Shanghai International Port Group, Victory Global Group – a unit of aviation conglomerate HNA Group - and the overseas investment arm of State Grid.

Joint sponsors on the deal include Bank of America Merrill Lynch, Morgan Stanley, Goldman Sachs and JP Morgan. UBS is the financial advisor.

The offer period is scheduled to close on Sept. 20.