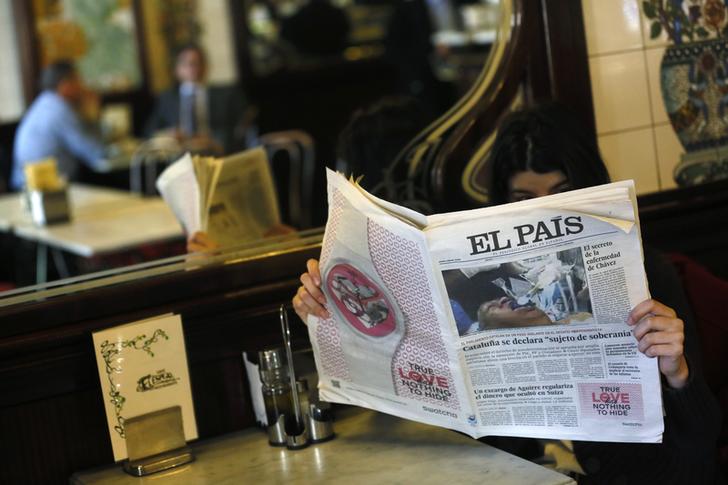 Spain’s largest media group has won breathing space from creditors in a complex, yet promising deal. The snag is that the plan inflicts dilution and relies on two assumptions: that the Spanish economy will pull through, and that assets will fetch good prices. Neither is certain.

A woman poses with a copy of the January 24 first edition of Spanish newspaper El Pais in a cafe in central Madrid.

Shareholders in Prisa, the Spanish media giant and owner of El Pais, have approved an issue of warrants as part of the terms of the group’s debt refinancing.

Under the proposed debt plan, creditors will extend maturities by 5 to 6 years. Prisa, which owes 3.5 billion euros, will have three years to sell non-strategic assets and will be able to conduct debt buybacks in the market at a discount. Any future changes to the debt deal will require approval from a majority of creditors.

As part of the deal, a group of institutional investors will extend a new 353 million euro credit line and receive warrants representing 17 percent of Prisa’s fully diluted shares. Prisa’s debt will be split into two additional tranches. A second tranche of 647 million euros with a maturity of five years and a third tranche of 2,278 million euros due in six years and with a defined milestones for debt reduction milestones. If these milestones aren’t met, creditors will have recourse to Prisa’s stake in publisher Santillana.